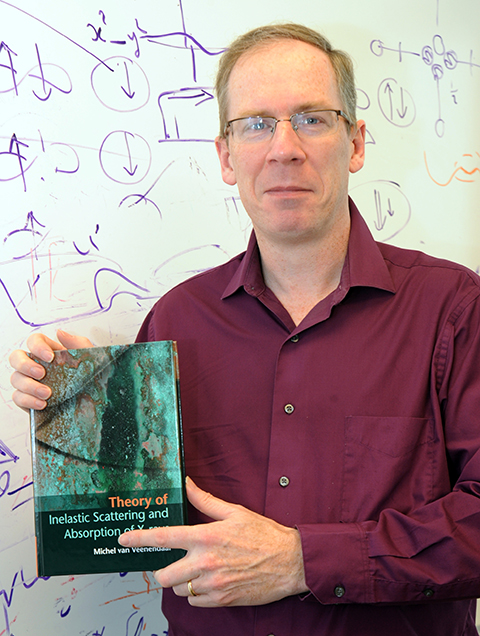 Michel van Veenendaal, Group Leader of the Theory and Software Group in the X-ray Science Division of the Argonne National Laboratory’s Advanced Photon Source and a distinguished research professor in the NIU Department of Physics, has a book out entitled, “Theory of Inelastic Scattering and Absorption of X-rays” (Cambridge University Press).

“The book should provide a background to graduate students and scientists that want to work in the area of x-ray absorption and inelastic x-ray scattering,” van Veenendaal said.

In 2011, van Veenendaal co-authored a review article on resonant inelastic x-ray scattering (RIXS) [Reviews of Modern Physics 83, 705 (2011)], which is one of APS’ most-cited papers of the last four years (the APS is a U.S. Department of Energy Office of science user facility). This paper deals with a spectroscopic technique that has come to the forefront in the last 1-2 decades. RIXS allows researchers to probe the electronic and magnetic structure by having x-rays scatter inelastically off a material. Recently, this technique played an important role in studying the magnetism of iridium oxides, where orbital and spin are intricately connected. Despite being a review paper, it was clear that most researchers entering this field would have a hard time understanding it. An outline was sent to Cambridge University Press for a book that would provide a solid theoretical grounding into the field of x-ray spectroscopy.

X-ray spectroscopy is a powerful tool that allows researchers to study properties of materials that are difficult to obtain with other methods. For example, since the wavelength of the x-ray can be tuned one can select a particular element in complicated compounds. However, although the basics are taught in most university quantum mechanics classes, the theory quickly becomes complex, often relying heavily on spherical tensor algebra. Also, the existing introductory books often do not derive results from the ground up. van Veenendaal’s book derives the x-ray absorption sum rules, which are used extensively by experimentalists doing x-ray absorption and x-ray circular dichroism. It also provides the underlying theory of the fine structure observed in spectroscopy, which is due to Coulomb interactions, spin-orbit coupling, and crystal fields.

“Theory of Inelastic Scattering and Absorption of X-rays” was released January 26, 2015, and is available on Amazon.