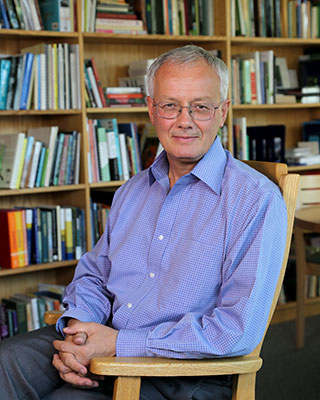 Peter Crane, the Carl W. Knobloch, Jr., Dean of the Yale School of Forestry & Environmental Studies (F&ES) and a long-time user of the U.S. Department of Energy’s Advanced Photon Source, has been awarded the 2014 International Prize for Biology administered by the Japan Society for the Promotion of Science (JSPS) for his work on the evolutionary history of plants.

The honor, which comes with a prize of 10 million yen, is awarded annually to individuals who have made outstanding contributions to the advancement of research in fundamental biology.

Crane, who is professor of botany at F&ES and also holds appointments in the Department of Ecology and Evolutionary Biology and the Department of Geology and Geophysics, will receive the award in December 2014 during a ceremony in Tokyo that will be attended by their Majesties Emperor Akihito and Empress Michiko.

Over more than three decades, Crane’s work has integrated data from living plants with new discoveries from the paleontological record to provide critical insights into the early history of plants and how they shaped the modern biosphere. He is a long-time user of the X-ray Science Division 2-BM x-ray beamline at the APS, an Office of Science user facility.

“To receive this prestigious award is a great personal and professional honor that also reflects the many contributions of my long-term collaborators” said Crane. “This recognition affirms a principle that has guided so much of my work: To understand the present one must also know the past. Indeed, if we hope to truly understand and better manage the world of plants, we must know more about their history.”

Studies of flowering plants’ diversification through time, by Professor Crane and colleagues, was featured in APS Science 2012, page 66, in the article “Modern Imaging Techniques Reveal Structures of Ancient Flowers,” based on Ann. Bot. London 109, 921 (2012), DOI: 10.1093/aob/mcs009.

Created in 1985, the International Prize for Biology commemorates the 60-year reign of Japanese Emperor Showa and his longtime devotion to biological research. The 30th anniversary of the award is dedicated to the field of Systematic Biology and Taxonomy.

The original Yale School of Forestry & Environmental Studies article by Kevin Dennehy can be read here.