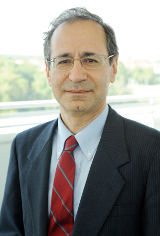 Ali Khounsary of the APS Engineering Support Division has been appointed as an Associate Editor of the ASME Journal of Heat Transfer.

The Journal of Heat Transfer, in publication since 1879, "disseminates information of permanent interest in the areas of heat and mass transfer. Contributions may consist of results from fundamental research that apply to thermal energy or mass transfer in all fields of mechanical engineering and related disciplines," according to the journal's web site.

Dr. Khounsary joined Argonne National Laboratory in 1988 as a member of the small group of dedicated researchers focused on the preliminary design of the Advanced Photon Source (APS) project. Since then, he has worked on the design and development of a number of key technical components of the APS facility including insertion devices, high-heat-load components, and x-ray optical systems, the results of which have been reported in more than 70 publications. Khounsary has served as an Associate Editor of the Journal of Optical Engineering and the Editor of special journal issues on high-heat-flux optical engineering and x-ray focusing. He is a fellow of the SPIE, a recipient of the Argonne National Laboratory Director's Award, and holds several U.S. patents on x-ray optics and instrumentation.