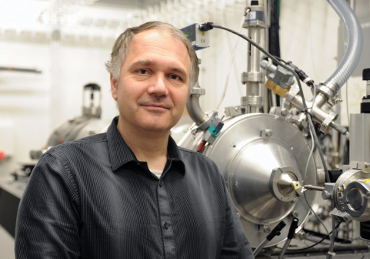 The inaugural Award for Excellence in Beamline Science at the Advanced Photon Source (APS) was presented to Argonne Physicist Jan Ilavsky, an X-ray Science Division beamline scientist working in partnership with ChemMatCARS at APS Sector 15.

The award, which was presented at the 2013 APS/CNM/EMC Users Meeting, recognizes Ilavsky's work in creating the world-leading APS ultra-small-angle x-ray scattering (USAXS) facility for the exploration of materials-based phenomena in pure and applied science.

Under his direction, USAXS has evolved from a "niche" technique to a mainstream capability enabling forefront research in static microstructure relationships as well as dynamics. Areas include nanoparticle formation, growth, aggregation, and stabilization; correlation of microstructure and properties in thermal barrier coatings, xerogels and aerogels, fuel cells, elastomeric materials and superalloys; and dynamics of particle interactions in inaccessible time and size ranges.

The Award for Excellence in Beamline Science at the Advanced Photon Source is intended to recognize beamline scientists who have made significant scientific contributions in their area of research or instrumentation development and have promoted the user community in this area.

This award is conferred each year on an active APS beamline scientist, regardless of employer or rank. It may recognize a career of meaningful, sustained contribution; a body of recent important work; and/or a single work of particular importance. Potential nominees are limited to full-time beamline scientists at the APS with at least half of their time spent on user operations or instrument development.