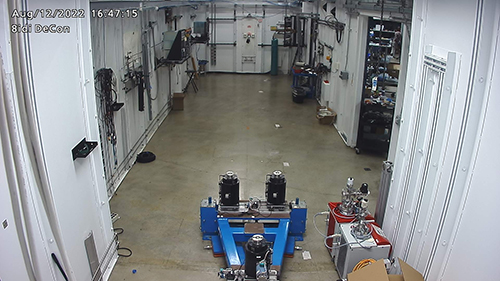 The upgrade of the Advanced Photon Source (APS), a U.S. Department of Energy (DOE) Office of Science user facility at DOE’s Argonne National Laboratory, is under way. And there’s no surer sign of that than construction actually happening at the facility. The project’s feature beamlines are starting to take shape, and the latest to begin its transformation is located at Sector 8.

When completed, the new feature beamline at 8-ID will be called X-ray Photon Correlation Spectroscopy (XPCS), named for the technique it will feature. XPCS will greatly improve the chemical and materials science research that comes out of the beamline. In order to build it, however, the upgrade team first needed to deconstruct the existing 8-ID-E and 8-ID-I experiment stations. This time-lapse video shows the work done over 14 days to remove equipment and turn these stations into blank canvases for the upgrade.

The two experimental enclosures are currently two of the longest and tallest at the APS, and they have facilitated more than 3,000 experiments over 25 years. The task of clearing the enclosures of all the complex instruments, electronics and sensitive cabling was done safely in less than 14 days.

“It was nice to see all the planning come to fruition, but mostly we had a great crew not afraid to get our hands dirty, and all with a ‘Git-'er-done’ mentality,” said Ray Ziegler, a senior scientific associate in the APS X-ray Science Division (XSD) Dynamics & Structure (DYS) Group, who led the advanced planning efforts. The ambitious timeline allowed the team of six extra time to focus on preparing for the upgrade.

To hit this deadline, planning started 10 months prior, outlining every detail of the deconstruction process down to the tiniest of details. This included accounting for each instrument and noting whether it can be reused or recycled and identifying appropriate storage space.

First, the team cleared all the floor equipment after disconnecting and carefully labelling it for later use. Second, cables stretching to hundreds of feet long around the entire perimeter of the enclosure were removed, coiled, and stored for use on the feature beamline, when it is completed. Finally, the enclosure walls were cleared of electronics racks, water and air hoses, and instruments were packed for storage.

Alec Sandy, associate division director in XSD, compared the deconstruction process to watching his career in reverse, as he was one of the two lead scientists who initially helped build the beamline from the ground up.

Where did all this equipment end up? Some components have gone into storage, but a large portion of the removed components are being reused around the APS on other beamlines. An efficient recycling mechanism was even set up to safely remove waste such as metals, electronics and lead from the site.

“We far exceeded our own expectations. The next steps are the most exciting part of the whole process,” said Suresh Narayanan, DYS group leader and a member of the deconstruction team. “The completed work takes us one step closer to the upgraded APS. With the enclosures all cleared, the team is looking forward to the removal of those enclosures, followed by the building of new ones for the new beamline.”

The removal and rebuild will take place between October 2022 and May 2023, with the APS officially shutting down for the installation of the new storage ring in April 2023. During that time, the team will install and commission the new instruments as they arrive and plan the first set of experiments after the upgrade is complete.  ― Marguerite Huber