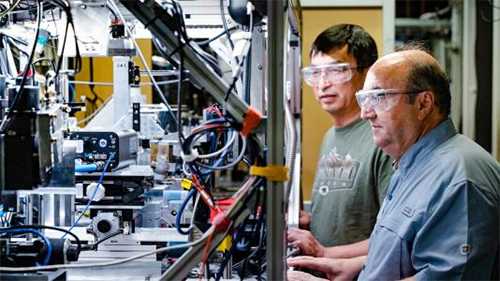 At its closest orbit, asteroid 162173 Ryugu is only about 60,000 miles from Earth. That’s only a quarter of the distance to the moon. But according to newly released results from an international team of scientists, this hunk of rock began its cosmic journey more than 4 billion years ago, and billions of miles away, in the outer part of our solar system. It traveled to us across space, taking in the history of this corner of the universe in the process.

These revelations are only part of the results of a global effort to study samples from the surface of Ryugu. These specks of asteroid dust were carefully collected and transported back to Earth by Hayabusa 2, a mission operated by the Japanese space agency JAXA, and then sent to institutions around the world. Scientists put these tiny fragments through dozens of experiments to tease out their secrets, to determine what they are made of and how the asteroid they came from may have been formed.

The resulting paper, recently published in Science, includes authors from more than 100 institutions in 11 countries. Numbered among them is the U.S. Department of Energy’s (DOE) Argonne National Laboratory, home to the Advanced Photon Source (APS), a DOE Office of Science user facility. The APS generates ultrabright x-ray beams that can be used to determine the chemical and structural makeup of samples atom by atom.

Argonne Distinguished Fellow Esen Ercan Alp led the research team at Argonne, which includes physicist and group leader Jiyong Zhao and physicist Michael Hu, and beamline scientist Barbara Lavina of both Argonne and the University of Chicago. All are co-authors on the paper.

Alp and his team worked for years to be included in this study. The key contribution of the APS, Alp said, is a particular x-ray technique he and his team specialize in. It’s called Mössbauer spectroscopy — named after German physicist Rudolf Mössbauer — and it is highly sensitive to tiny changes in the chemistry of samples. This technique allowed Alp and his team to determine the chemical composition of these fragments particle by particle.

What they and their international colleagues found was surprising, Alp said.

“There is enough evidence that Ryugu started in the outer solar system,” he said. ​“Asteroids found in the outer reaches of the solar system would have different characteristics than those found closer to the sun.”

The APS, Alp said, found several pieces of evidence to support this hypothesis. For one, the grains that make up the asteroid are much finer than you would expect if it was formed at higher temperatures. For another, the structure of the fragments is porous, which means it once held water and ice. Lower temperatures and ice are much more common in the outer solar system, Alp said. 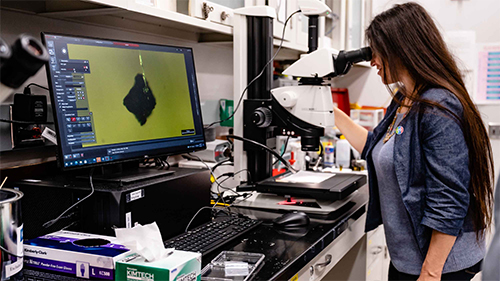 The Ryugu fragments are very small — ranging from 400 microns, or the size of six human hairs, to 1 millimeter in diameter. But the x-ray beam used at the X-ray Science Division Inelastic X-ray & Nuclear Resonant Scattering  Group’s beamline 3-ID-B can be focused down to 15 microns. The team was able to take several measurements on each of the fragments. They found the same porous, fine-grained structure across the samples.

With the APS finely tuned spectroscopy capabilities, the team was able to measure the amount of oxidation that the samples had undergone. This was especially interesting since the fragments themselves had never been exposed to oxygen — they were delivered in vacuum-sealed containers, in pristine condition from their trip across space.

While the APS team did find a chemical makeup similar to meteorites that have hit the Earth — specifically a group of them called CI chondrites, of which only nine are known to exist on the planet — they did discover something that set the Ryugu fragments apart.

The spectroscopy measurements found a large amount of pyrrhotite, an iron sulfide that is nowhere to be found in the dozen meteorite samples the team also studied, courtesy of French collaborators Mathieu Roskoz (National Museum of Natural History) and Pierre Beck (Universite Grenoble Alpes). This result also helps scientists put a limit on the temperature and location of Ryugu’s parent asteroid at the time it was formed.

“Our results and those from other teams show that these asteroid samples are different from meteorites, particularly because meteorites have been through fiery atmosphere entry, weatherization and in particular oxidation on Earth,” said Hu. ​“This is exciting because it’s a completely different kind of sample, from way out in the solar system.”

With all of the data combined, the paper lays out the multi-billion-year history of 162173 Ryugu. It was once part of a much larger asteroid which formed about 2 million years after the solar system did — roughly 4.5 billion years ago. It was made of many different materials, including water and carbon dioxide ice, and over the next three million years, the ice melted. This led to an interior that was hydrated and surface that was dryer.

About a billion years ago, another chunk of space rock collided with this asteroid, breaking it apart and sending debris flying, and some of those fragments coalesced into the Ryugu asteroid we know today.

“For planetary scientists, this is first-degree information coming directly from the solar system, and hence it is invaluable,” Alp said.

The Argonne team plans their own paper, going into detail about their x-ray techniques and results. But being part of such a large, multi-national scientific effort was thrilling, they said, and they look forward to being part of future experiments of this type.

“This was an exciting and challenging experience for us to participate in such a well-coordinated international research project.” Zhao said. ​“With an upgrade to the APS in the works that will deliver even brighter x-ray beams, we are anticipating studying more materials like this, from far-flung asteroids and planets.”