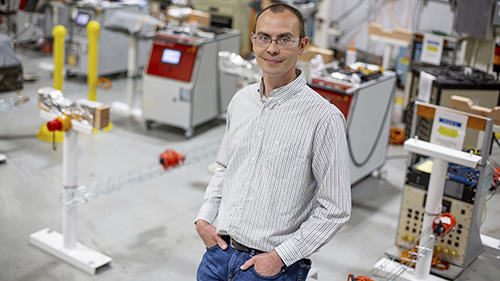 There’s something challenging and inspiring about following up a perfect 25-plus-year record.

A big component of the new electron storage ring that will be installed as part of the APS Upgrade (APS-U) is a system that essentially recreates the vacuum of deep space, in order to keep the electrons from colliding with gas molecules and dissipating into the atmosphere. Zientek is responsible for welding together nearly all of the 190 customized ultra-high vacuum chambers that will be installed within the new accelerator.

The APS vacuum system has a known and admirable quality standard to meet right on site. The current APS, which is nearly 30 years old, has had zero vacuum system issues due to welding during its tenure. That means that within the vacuum system of the APS’ accelerator, there have been no real leaks to atmosphere and no virtual leaks – leaks at the molecular levels of a material – caused by poor welding or material defect in almost three decades.

In fact, vacuum parts and entire vacuum systems within the original accelerator were welded on the exact same inert gas machine that Zientek uses today to weld new parts for the upgraded storage ring. Some of those older parts, which Zientek offhandedly calls “widgets,” even bear the signature of roughly 30 engineers and technicians who worked carefully on them before they were enclosed in the APS in the 1990s.

“It’s been really meaningful to see the history and capability of what is achievable in the vacuum systems so I can strive to meet that standard,” said Zientek, who joined Argonne in 2009 after earning degrees from the University of Illinois at Chicago and Joliet Junior College. “I want to be able to repeat it and make it even better.”

Zientek and a small team of gloved engineers and technicians receive and clean the vacuum chamber system parts from vendors upon their arrival at Argonne. Cleanliness is essential to a good weld, so even the aqueous cleaning tanks are themselves thoroughly cleaned once or twice per week. Technicians check and re-check for virtual leaks or microcracks that could cause a material to unexpectedly fail. They strive to meet exacting high standards.

“Nothing leaves this building unless it meets those standards,” said Zientek adamantly.

Once the clean parts are dry, Zientek mounts them on the machine and begins a stringent process to create a perfect chemical ratio of three melted metals. The process results in one of nine precise welds conceived of for the APS-U’s ultra-high vacuum system.

These nine welds were meticulously planned over the course of four years by a small number of people at Argonne who understand the mechanics and capabilities of the machines involved. Their knowledge is a guild-like combination of experience welding thousands of chambers, education in weld school, and first-person instruction passed down from others with historical experience using the same machines. Their objective in planning the nine welds was to make a theoretical vision posed by physicists a reality within actual industrial parameters and limitations. The result: an entirely customized system.

“Almost nothing we use here is off the shelf,” Zientek said.

After the weld, Zientek sends a small sample of the part to Argonne’s Central Shops to certify the quality of his work. The samples are encased in small black discs – “we call them hockey pucks,” said Zientek – which Central Shops examines under a microscope. If a part doesn’t pass inspection, the team analyzes why it failed the weld certification and does everything again.

Assuming there is a good weld, a part passes two more key tests before moving forward.

First, the part is connected to a leak detector cart, which is pumped free of all gases. It then undergoes a helium leak test. If it passes, the part goes to the “bake out” area, where it is wrapped in fiberglass blankets and heated until all remaining moisture is gone. This takes roughly four days, during which Zientek and his team run multiple test reports.

A successful bake out means the part is loaded into a crate and transported five minutes down the road to the site where the powerful magnets that will make up the new accelerator are being assembled.

The samples of every weld ever done at Argonne are archived not far from where Zientek sits. Everything he welds will end up in the archive, too.

“All samples welded in Building 382 are archived forever and ever,” said Zientek, who adds that the group does projects for Brookhaven National Laboratory, Fermilab, SLAC, and other DOE national laboratories, too. “We have original samples from the current APS and all other projects so that if something goes wrong, there is traceability. We can say, ‘this weld was from such and such date’ and we can check the tests, reports, and cleaning. Overall, there is traceability to try to understand what happened if something were to fail.”

Zientek suspects his interest in his current work may stem from his family’s 50-year-old small business. They own a tavern on one floor and a hobby shop on another. “Model trains and cars definitely sparked my interest in the science of fitting a lot of stuff into a little space,” he said. “There is a lot of work, time and science to what we do, and there’s a bit of art, too.”  ― Kristen Mally Dean (Argonne)