NASA Controls Developers Make an EPICS Visit to the APS 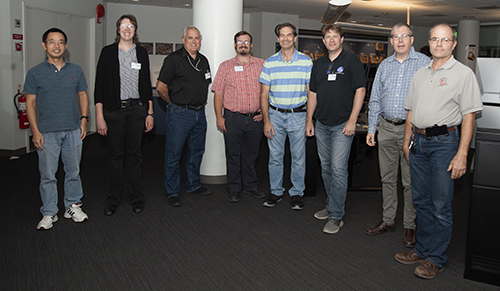 EPICS is a set of open-source software tools, libraries, and applications that make up a toolkit for building distributed control systems to run on a variety of operating systems. EPICS has been used for over 25 years at the APS, and world-wide it operates devices such as particle accelerators, telescopes, and other large scientific facilities. Control systems based on EPICS can interface to equipment from many different manufacturers and can scale from a single desktop PC up to a large-scale facility like the APS that contains hundreds of computers networked together to provide control and feedback of many thousands of devices and millions of data points from a central control room.

EPICS is also the name of the collaboration between the many organizations from all around the world that have been involved in the software's development. The original core software was written jointly by Los Alamos National Laboratory and Argonne National Laboratory, and now runs scientific facilities on all 5 continents. New versions of the tools continue to be released, developed cooperatively by their users and some associated commercial companies, under the oversight of the EPICS Council.