In with the New: Mark Erdmann Leads the Installation of the APS Upgrade’s New Storage Ring 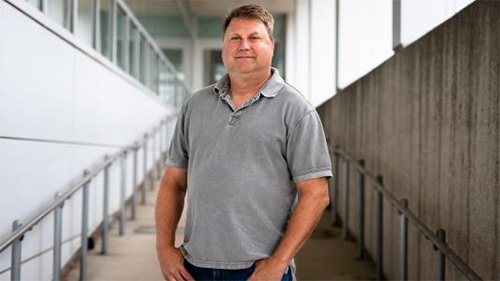 They say that when one door closes, another opens. Mark Erdmann can tell you that’s true.

In the early 1990s, Erdmann was working as an engineer on the Superconducting Super Collider, an enormous particle physics project that was under construction in Texas. When that project was canceled in 1994, Erdmann suddenly found himself out of a job. Then serendipity — in the form of the U.S. Department of Energy’s (DOE) Argonne National Laboratory — came calling.

That’s how Erdmann found himself on the ground floor of the construction of the Advanced Photon Source (APS), now a DOE Office of Science user facility at Argonne. Twenty-eight years later, the APS is one of the world’s leading sources of ultrabright x-ray light for scientific research, and Erdmann is helping to lead the effort to build a massive upgrade to the facility. And as the door closes on the original APS, another will open, one that will put the facility at the forefront of x-ray science for many years to come.

One of the main goals of the APS Upgrade project is to remove the original electron storage ring — basically a series of powerful magnets that guide tiny particles — and install a new, state-of-the-art machine. So when Erdmann says he’s overseeing the removal of the current storage ring and the installation of the new one, you know he has a big job. To accomplish it, Erdmann says, he will draw from his years of experience with the APS, dating back to the facility’s early days.

“I know more about the APS and the upgrade than someone from the outside would,” he said of being offered his current role in late 2021.

Erdmann studied superconducting technologies at the University of Wisconsin-Madison. His first job at the APS was as a quality assurance representative, making sure that the parts being installed in the original storage ring were up to snuff. For about 20 years Erdmann then worked on the experiment stations at the APS, called beamlines, and the components that deliver x-ray beams to those stations. Those components include the transition between the storage ring and the beamline, called a front end.

When the APS Upgrade project kicked into gear a few years ago, project leaders moved forward with a plan to design and build all-new front end systems for most of the beamlines in the facility. They tapped Erdmann to lead that effort. The front ends not only send high-quality x-ray beams to the beamlines, they incorporate important safety controls — with their shutters closed, they’re able to stop even the brightest of beams the upgraded APS will generate, so scientists can safely adjust samples in the beamline.

Those front-end systems are nearly finished — teams have been building and testing them in an offsite facility not far from the Argonne site, a facility that has basically been Erdmann’s second home. He won’t have to go far for his new role with the upgrade, since the components for the new electron storage ring are under construction in that same facility. The new storage ring will be made up of 1,321 powerful electromagnets, assembled (along with vacuum systems and other components) into 200 modules.

More than 100 of those modules are partially completed now, and in storage at the offsite facility. Each module can weigh up to 40,000 pounds. Using specialized equipment, the upgrade team will carefully move each one out of the building, transport it by truck to the APS facility, and slowly maneuver it into the ring. (The upgrade team recently practiced moving one of the concrete plinths into the facility.)

It will take a full year to remove the original storage ring and install and commission the new one. That year-long installation period is currently scheduled to begin in April 2023, and Erdmann is deep into preparations for what will be a complicated endeavor.

“My days are a lot of meetings to prepare for the installation period,” he said. ​“I’m trying to lay the groundwork for the removal and installation, and make sure everyone is following the same procedure. Everyone has been positive and are looking forward to putting our plans into action.”

The big difference between the effort to build the original APS and the ongoing effort to upgrade it, according to Erdmann, comes down to the space itself. Building a storage ring from scratch presents fewer challenges, he said, than orchestrating a removal and installation with the current ring in place.

“It’s harder to prepare for this with the original in the ring,” Erdmann said. ​“It’s a challenge to get things in and out. Also, there are more strict protocols in place now than 25-plus years ago, and I prefer that.”

Ask Erdmann his favorite part of the job, and he will point to his co-workers. Erdmann praises the positive attitudes of everyone working on the project. The significance of his work and the science that will come out of the upgraded APS, is not lost on him either.

“It’s hard to even describe it all, from materials to pharmaceuticals,” he said. ​“So many things happen here that affect our lives in a good way. Our team, we just deliver the beam to the people running the experiment. But the machine has to work to make the science happen.”