U. Wyoming Researchers to Study Novel Catalyst at the Advanced Photon Source 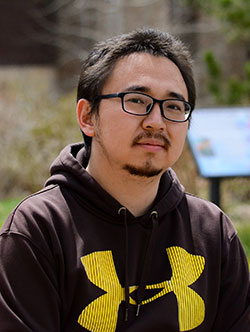 The original University of Wyoming news story can be read here.

University of Wyoming (UW) researchers recently earned an allotment of time on an x-ray beamline at the U.S. Department of Energy’s Advanced Photon Source (APS) at Argonne National Laboratory. X-ray beam time for experimentation at the facility is limited to a nominal 5,000 hous per year and is awarded via a rigorous proposal evaluation system. The UW research team is working to achieve in situ x-ray diffraction (XRD) measurements on a novel catalyst, which is able to convert carbon dioxide mixed with methane into a valuable synthesis gas using a dry-reforming process. The project is led by Jing Zhou, a UW professor of physical chemistry, and Joseph Holles, an adjunct UW professor of chemical engineering.

If the project is successful, the gas rendered through the conversion process can be applied to manufacturing high-demand solvents and chemicals used in making coal-derived engineered products on-site, or simply sold as a commodity product.

“Many industry and academic researchers seek to use the APS facility, and gaining acceptance to use the facility is very competitive,” CCCC Director Richard Horner says. “Over the last three years, the cut-off score that determines successful awards has increased from around 1.9 to 1.4 ― 1 being the best. The project received a final score of 1.3, which suggests that independent reviewers have recognized the work and believe it has significant industrial and scientific importance.”

The catalyst formulation is proprietary and subject to a patent filing, with early laboratory results indicating excellent performance characteristics and behavior. Advances in technology through the sophisticated APS equipment will be the first step in scaling up and commercializing the catalyst.

“We are fortunate to be offered time on the most advanced synchrotron facility globally,” Horner says. “This is a great opportunity for the team to better understand why the catalyst performs in the way it does and generate insights for further performance enhancement as we strive to commercialize our technology.”

According to Horner, the challenge in industrializing the catalyst developed by the team is how to best anchor the active components cerium, titanium and nickel onto an alumina support, which is necessary to provide the mechanical stability. The team has developed about a half-dozen methods for attaching the active components on to the alumina support.

UW doctoral student Qian Yang, of Laramie, has been working to develop an anchor solution for the catalyst as part of his dissertation research. He will travel to the APS facility in July to further advance the project.

“XRD is one of the most used techniques in catalyst studies,” Yang says. “By measuring the intensities and scattering angles of the emitted x-rays of the catalyst sample, XRD can be used for the phase identification of a crystalline catalyst material and provide information on unit cell dimensions.”

The results from the studies at the APS, an Office of Science user facility, will be crucial for selecting the desirable catalyst synthesis formulation and catalyst manufacturing route, he says.

“At APS, we will be able to perform in situ XRD measurement on our catalyst samples under dry reforming of methane reaction conditions. This will allow for the elucidation of active phases evolving during the reaction,” Yang adds.