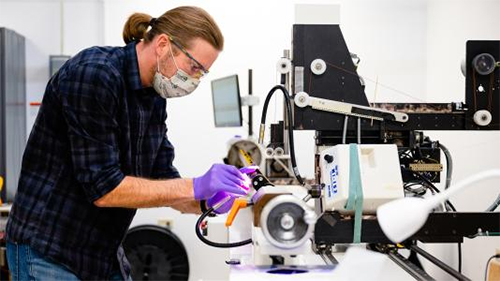 Just as chefs in a Michelin-starred restaurant collaborate to produce haute cuisine, engineers at the U.S. Department of Energy’s (DOE) Argonne National Laboratory work together to create a similarly refined product: an upgraded facility that will drive the future of x-ray science, resulting in breakthroughs that make us better off and more secure.

This upgrade of Argonne’s Advanced Photon Source (APS) will produce x-ray beams hundreds of times brighter and more tightly focused than those currently generated. The APS’s main purpose is to produce x-rays for experiments from electrons traveling at close to the speed of light in a ring more than a kilometer in circumference. With these brighter x-ray beams, the APS Upgrade will enable experiments at unprecedented resolution and scale. Engineers working on the APS Upgrade project have their hands on every aspect of the facility, from the magnets used to steer the electron beam, to the building that houses the light source.

The interaction between scientists looking to make use of the upgraded APS and engineers working to build the facility forms a two-way street. In this relationship, the scientists suggest potential improvements and engineers identify which are logistically possible. According to Liu, the process of creating the upgraded APS enriches the engineering disciplines that help enable it.

“Working on the APS upgrade helps put into practice all of our expertise in every form of engineering,” Liu said. ​“The ambitious nature of the project pushes us all to the limits of our understanding and our ability and helps us to reach new heights. It takes a team of engineers working on the same problem with different backgrounds, perspectives and skillsets to bring a new facility to life.”

“As different engineers come together, we’re always learning something new,” added Argonne principal mechanical engineer Dana Capatina, who is responsible for helping to develop new improved components to deliver the x-ray beams. ​“The beams we will generate once the upgrade is complete will be much more focused, which requires equipment that is much more precise.”

The collaborative nature of the APS Upgrade Project creates a fertile field for new designs where ideas cross-pollinate. For instance, in order to create the more than 1,300 magnets that will be replaced in the new ring that contains the speeding electrons, physicists have to work closely with magnet engineers, who in turn must collaborate with mechanical engineers to bring the design into reality.

“It’s an iterative process,” Liu said. ​“One engineer in one area will go back and forth with an engineer in another area. Then they’ll confer with a physicist to constantly improve the final design. To optimize what you’re trying to build, you might need to work with five or six different kinds of engineers.”

“The x-ray beamlines exist for the scientists,” Capatina added. ​“We have to translate their needs to achieve pivotal discoveries into something that we can build.”

Even when the APS Upgrade Project is complete, different kinds of engineers will be needed to help ensure the upgraded APS runs smoothly. ​“Even when everything is installed, you have power supply engineers and control engineers who are in charge of the operation of the facility, just as we do today,” Liu said.

As new discoveries are made, they form the basis of new strategies for designing the facility, bringing scientists and engineers together to assess how the APS Upgrade Project could be improved. These conversations often result in elegant technical achievements.

“A lot of people think that a magnet, for instance, comes as a single, simple package,” Liu said. ​“A lot of the times most people don’t know all the detail that comes in the engineering of something that looks simple. Often the biggest challenges are creating a simple design for something that has a complicated function.”

The convergence of multiple types of engineering yield new areas of specialization that are tailored for specific technical challenges. ​“Equipping and optimizing an experiment or experimental station to make use of the high-quality beam necessitates mechatronics — a combination of mechanical and electrical engineering that leverages the most recent advances in each,” Capatina said.

To Liu, it’s the attention to detail that makes the APS Upgrade Project what it is. ​“Just like a chef, an engineer has to be thorough and put their heart and soul into making something beautiful and functional,” she said.

The original Argonne feature by Jared Sagoff can be read here.

The U. S. Department of Energy Office of Science’s Advanced Photon Source (APS) at Argonne National Laboratory is one of the world’s most productive x-ray light source facilities. The APS provides high-brightness x-ray beams to a diverse community of researchers in materials science, chemistry, condensed matter physics, the life and environmental sciences, and applied research. These x-rays are ideally suited for explorations of materials and biological structures; elemental distribution; chemical, magnetic, electronic states; and a wide range of technologically important engineering systems from batteries to fuel injector sprays, all of which are the foundations of our nation’s economic, technological, and physical well-being. Each year, more than 5,000 researchers use the APS to produce over 2,000 publications detailing impactful discoveries, and solve more vital biological protein structures than users of any other x-ray light source research facility. APS scientists and engineers innovate technology that is at the heart of advancing accelerator and light-source operations. This includes the insertion devices that produce extreme-brightness x-rays prized by researchers, lenses that focus the x-rays down to a few nanometers, instrumentation that maximizes the way the x-rays interact with samples being studied, and software that gathers and manages the massive quantity of data resulting from discovery research at the APS.