The Many Ways Argonne Advanced Science in 2021: APS Highlights 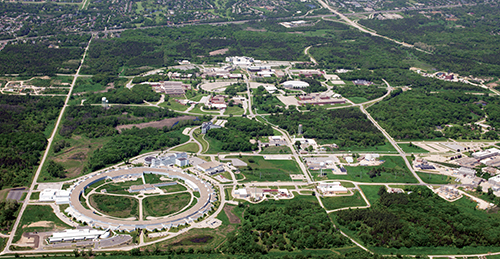 From a list of scientific breakthroughs enabled by research at Argonne, here are the advances based on research at the DOE's Advanced Photon Source (APS).

Peering into perovskites for photovoltaics

Capturing sunlight and converting it into electricity is one major way of getting carbon-free energy.

Perovskites are a class of materials with a unique crystal structure that could offer major advantages for harvesting solar energy. They are cheaper than materials currently used to convert sunlight to electricity and are quite effective.

Argonne scientists used the ultrabright x-rays at Argonne's APS, a DOE Office of Science user facility, to reveal the nature of perovskites at the atomic scale. The study found that liquid-like motion in perovskites may explain how the materials efficiently produce electric currents. These insights could help yield information to develop new models for the best perovskite materials that can be used for solar cells.

Using x-rays provided by the APS to bridge the gap between MRI images and electron microscopy, researchers have, for the first time, imaged an entire mouse brain across five orders of magnitude.

The advance will allow researchers to connect biomarkers at the macro- and microscale and proves that it is possible to do whole brain imaging.

Using a kind of tomography similar to a CT scan, the researchers imaged a one cubic centimeter large mouse brain at the level of a micron, which took six hours and yielded two terabytes of data.

The researchers have already used this technique to probe important neuroscientific topics, including imaging the brains of mice that have been genetically engineered to develop Alzheimer’s disease.

Relief for those living with brain disorders may one day arrive thanks to new research that combines both optics and genetics. Argonne research uses light to stimulate neurons deep within the brain through the use of nanoparticles that light up when exposed to x-rays.

Instead of using implanted electrodes or fiber-optic wires, this new technique achieves deep brain stimulation in a less invasive way.

The nanoparticles serve as an internal light source, absorbing x-rays and re-emitting red light deep within the brain, either stimulating or quelling targeted areas.

The research could have implications for those who suffer from epilepsy, essential tremor, or Parkinson’s disease.

In November, pharmaceutical company Pfizer announced results from a clinical trial showing that an oral antiviral treatment reduced hospitalization and death in adult patients with COVID-19 by 89%. Pfizer has submitted the new treatment, Paxlovid, for emergency use authorization in the U.S. Scientists at Pfizer created Paxlovid with the help the (APS).

A massive upgrade is underway that will enhance the capability of Argonne’s APS, one of the world’s most productive x-ray light sources. When the upgrade is finished, the facility will generate x-rays that are up to 500 times brighter than the extremely bright ones it produces now, paving the way for future scientific discoveries.

The upgrade to the APS involves replacing the inner workings of the machine, including installing a new electron storage ring composed of powerful magnets. Construction of a new building, the Long Beamline Building (LBB), is also in progress and expected to be completed by June 2022. The LBB houses two of the nine new experiment stations designed to make use of brighter x-ray beams that will allow scientists to test thicker samples under various conditions. Many of the existing experiment stations will see significant improvements as well. The upgraded APS is currently scheduled to come online in 2024.

You can read the entire lists here and here.