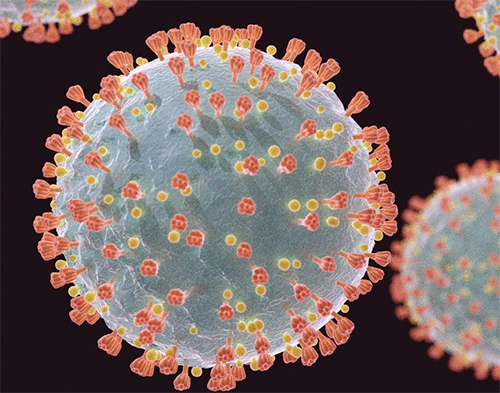 The original Argonne feature story by Kevin A. Brown and Andre Salles can be found here.

For more than a decade, scientists using the Advanced Photon Source (APS) — a U.S. Department of Energy (DOE) Office of Science user facility at DOE’s Argonne National Laboratory — have been making pivotal discoveries that are helping in the battle against COVID-19.

Early work on previous coronaviruses, such as the original SARS-CoV, which causes SARS, has been unexpectedly key in current efforts at the APS to understand the SARS-CoV-2 virus (and its emerging variants) that causes COVID-19.

The ultrabright X-rays produced at the APS can illuminate the contours of the virus’s proteins, giving scientists a precise image of how they are structured and how antibodies and drug candidates might inhibit them. Because of this capability, the APS has become a vital tool in the effort to understand and fight this virus. Since January 2020, more than 380 scientists have used the APS to determine more than 160 structures of the proteins that make up SARS-CoV-2.

Nowhere was the APS’s role in the fight against COVID-19 more apparent than at a virtual workshop convened for a May 11 and 12 meeting for researchers who use the APS and the Center for Nanoscale Materials, also a DOE Office of Science user facility at Argonne.

Organizers of the workshop invited some of the most prominent scientists using the APS for SARS-CoV-2 research to discuss their work. The two-day session included scientists from Argonne, the University of Chicago, research centers, universities and pharmaceutical companies. Together they painted a picture of the herculean scientific effort that resulted in the rapid development of vaccines and treatments, and of the continuing search for new ways to fight the virus.

For several of these scientists, revisiting work done on earlier viruses — including previous coronaviruses, such as the original SARS-CoV, which causes severe acute respiratory syndrome – was the key to fighting COVID-19. This work showed that the foundation for the response to this pandemic was laid over the past 20 years, in research done on similar viral proteins.

Jason McLellan, associate professor at the University of Texas at Austin, was one of many speakers who shared his team’s research with the broad and diverse group of scientists and stakeholders in attendance. ​“The workshop provided an opportunity to describe the history of our work developing the stabilized spike proteins that are found in the leading COVID-19 vaccines,” he said.

McLellan spoke about his work at the APS on respiratory syncytial virus (RSV), which he began in 2009 while working for the National Institutes of Health. McLellan and his colleagues used the APS to obtain three-dimensional models, or blueprints, of a protein on the surface of RSV. Using these models, McLellan’s team precisely modified the protein into an optimal vaccine candidate.

That technique was later shown to work against coronaviruses as well, and it is part of the design of the three COVID-19 vaccines in use now in the United States. This research helped to accelerate the development of these vaccines, the fastest such process on record.

“Scientific research takes years, or decades, and this work must be performed in advance of a pandemic,” McLellan said. ​“The response to the pandemic by scientists and those supporting them has been tremendous.”

Robert Hoffman, now a former associate research fellow at Pfizer, talked about some of Pfizer’s work to develop a potential treatment for COVID-19. Specifically, Hoffman shared that at the start of the pandemic, Pfizer scientists evaluated some of their portfolio of therapeutics and screened some of the compounds Pfizer had previously identified as potential therapeutics during the SARS outbreak in the early 2000s. That included one, called PF-00835231, which was discovered with the help of the APS.

He noted that PF-00835321 was further optimized by Pfizer for potential treatment of SARS-CoV-2, and preclinical SARS-CoV-2 binding data was, in part, verified with the help of APS X-rays. Hoffman said that optimized compound, called PF-07304814, has entered clinical trials.

Pfizer has recently applied for an emergency use authorization for Paxlovid, an antiviral candidate designed with help from the APS. This treatment proved effective against COVID-19 in clinical trials.

Andy Mesecar, professor at Purdue University, talked about his team’s work over several years to find a broad-spectrum drug compound that inhibits multiple coronaviruses. They looked at 205 compounds, and using X-ray structural data (gathered in part at the APS), ranked them in terms of effectiveness against the SARS-CoV virus and other human and animal coronaviruses.

When SARS-CoV-2 emerged, Mesecar said, it turned out to be roughly 90 percent similar to the first SARS virus, and they immediately tested one of their broad-spectrum compounds — X77 — that had shown to work well against SARS and other coronaviruses.

“We knew within 24 hours which compound to take off the shelf and try,” Mesecar said.

Some researchers highlighted how they are shifting away from learning how the virus and its variants — known and unknown — infect us and spread, and toward even more effectively minimizing the future impact of COVID-19, with the help of the APS.

Pamela Björkman, professor at the California Institute of Technology, spoke about her work with neutralizing antibodies that protect against coronaviruses. Her team’s research, she said, provides evidence that current vaccines do protect against known and emerging variants — with a caveat.

“While it appears the efficacy of the current vaccines is diminished, it has not been eliminated, so we’re probably okay for now,” explained Björkman. ​“But we’ll probably need booster shots in the future, and we have to keep monitoring the situation with variants of concern.” The good news, she said, is that structural biology will ​“greatly assist the rational design of revised vaccines.”

The Centers for Disease Control and Prevention (CDC) now recommends that people with moderately to severely compromised immune systems receive an additional dose of mRNA COVID-19 vaccine at least 28 days after a second dose of the Pfizer-BioNTech COVID-19 vaccine or the Moderna COVID-19 vaccine.

Cheng Zhang, associate professor at the University of Pittsburgh School of Medicine, said the workshop ​“allowed our team to connect with world leading experts in virology and structural virology.”

Zhang and his colleagues are focused on treating COVID-19 patients. His work, with Yi Shi, professor at the University of Pittsburgh, involves smaller antibodies — called nanobodies — that form naturally in llamas, camels and alpacas. These nanobodies, due to their tiny size and adaptability, may prove to be effective treatments against COVID-19.

Like Björkman, Zhang places high value on the APS as a resource for advancing his research that will also fight know variants of the virus.

“I am sure the APS will continue to facilitate structural studies on SARS-CoV-2 and diverse virus neutralizing antibodies,” he said. ​“The structural information will help to understand and develop novel treatment methods for the current virus variants.”

Erica Ollmann Saphire, president and CEO of the La Jolla Institute for Immunology and director of the Coronavirus Immunotherapy Consortium (CoVIC), highlighted how researchers are leveraging CoVIC to streamline and accelerate the development of antibody-based therapeutics that combat variants.

“Structural biology is the driver in letting us sort antibodies into different functional activities and susceptibility to variants of concern,” Ollmann Saphire said. ​“That structural framework has also shown us which antibodies to pair to make better cocktails; our structures have let CoVIC do matchmaking for companies that had a single molecule but needed a synergistic companion for their cocktail.”

Ian Wilson, Hansen Professor of Structural Biology and chair of the Department of Integrative Structural and Computational Biology at Scripps Research, also noted the value of the APS to the research community — even under restrictive conditions of the pandemic.

“The APS has been instrumental to our structural work by enabling us to collect data continuously throughout the pandemic,” said Wilson. ​“We expect to continue to take advantage of the excellent facilities at the APS to determine crystal structures related to COVID-19 and other infectious diseases.”

A key focus of Wilson and his team’s research is on understanding mutations and the effectiveness of vaccines against them. Researchers are using the structures of antibodies to design next-generation vaccines, offering hope that variants will not result in a future pandemic.

“The current COVID-19 vaccines still protect against the variants, but their efficacy is often diminished especially against variants of concern,” Wilson said.

The final speakers of the workshop, Christine Kreuder Johnson and Jonna Mazet, both professors at the University of California Davis School of Veterinary Medicine, drove the point home that the structural biology work happening now could help prepare us for the next pandemic. Both work to track viruses within the animal kingdom that have not made the jump to the human population, but could. The results of their work can be found on their website.

“We can’t yet know what is coming next, so we have to be prepared for anything,” Mazet said.

More information on Argonne’s work to fight COVID-19 can be found here. The full list of speakers for the workshop can be seen here. A list of published COVID-19 research using the APS is online here.