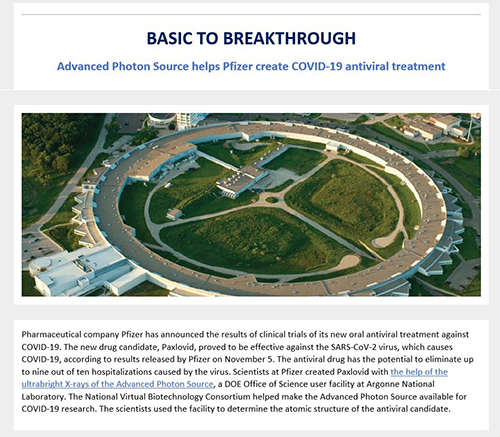 A new drug candidate, Paxlovid, which has proven to be effective against the SARS-CoV-2 virus, and a superionic ice that is neither liquid nor solid, both based on research at the Advanced Photon Source (APS), are featured in the November 15, 2021 issue of the U. S. Department of Energy (DOE) “Communique” e-newsletter.

The “Communique” Basic Breakthrough section reports that the “Advanced Photon Source helps Pfizer create COVID-19 antiviral treatment. Pharmaceutical company Pfizer has announced the results of clinical trials of its new oral antiviral treatment against COVID-19. The new drug candidate, Paxlovid, proved to be effective against the SARS-CoV-2 virus, which causes COVID-19, according to results released by Pfizer on November 5. The antiviral drug has the potential to eliminate up to nine out of ten hospitalizations caused by the virus. Scientists at Pfizer created Paxlovid with the help of the ultrabright X-rays of the Advanced Photon Source, a DOE Office of Science user facility at Argonne National Laboratory. The National Virtual Biotechnology Consortium helped make the Advanced Photon Source available for COVID-19 research. The scientists used the facility to determine the atomic structure of the antiviral candidate.” This breakthrough research was carried out at the Industrial Macromolecular Crystallography Association Collaborative Access Team (IMCA-CAT) beamline at the APS, operated by the Hauptman-Woodward Medical Research Institute (HWI) on behalf of a collaboration of pharmaceutical companies, of which Pfizer is a member.

Under the heading “In the News,” Strange, dark, and hot ice could explain Uranus and Neptune’s wonky magnetic fields links to the Popular Science article about a layer of “hot,” electrically conductive ice that could be responsible for generating the magnetic fields of ice giant planets like Uranus and Neptune. This work from the Carnegie Institute for Science and the University of Chicago Center for Advanced Radiation Sources researchers was carried out at the GeoSoilEnviroCARS 13-ID x-ray beamline at the DOE’s APS. The study, published in Nature Physics, reveals the conditions under which two such superionic ices form. More on this subject can be found on the APS web site, the Carnegie Institute for Science web site,  and the University of Chicago web site.