Through the Looking Glass: How a State-of-the-Art Optics System Will Make the APS Upgrade Possible 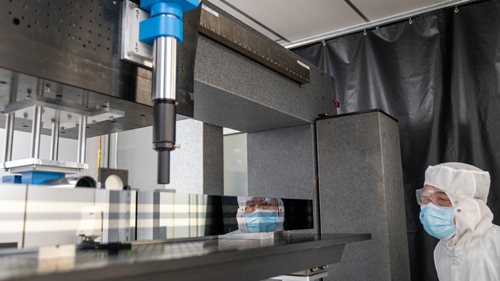 The original Argonne feature story by Andre Salles can be read here.

In a way, that’s the challenge for the team designing the optics system for the upgrade of the Advanced Photon Source (APS), a U.S. Department of Energy (DOE) Office of Science User Facility at DOE’s Argonne National Laboratory. When the facility comes back online, currently scheduled for 2024, the upgraded APS will deliver x-ray beams that are up to 500 times brighter than those generated at the current facility. It’s the job of the optics team to figure out how to focus those intense beams down to incredibly small sizes.

In short, these phenomenally bright beams need to be reduced to itty bitty spot sizes, often smaller than a single micron, meaning smaller than bacteria or blood cells. Scientists will use these tightly focused, extremely bright beams to uncover the properties of novel materials for new devices, for instance, or to help develop the next generation of medicines that will improve our daily lives.

Light sources such as the APS use a combination of mirrors, complex devices called monochromators, and lenses to manipulate and focus x-ray beams in various ways. These components are all installed in experiment end stations called beamlines located around the APS. Scientists from around the world use those x-rays for scientific discovery. Upgrading this machine will require new technology and newly designed optical components that are more precise than those in use at the current APS.

“All of the beamlines – including nine newly built ones and 15 with significant enhancements – will be state of the art, and designed to do something we couldn’t do before,” said Lahsen Assoufid, leader of the Optics Group in Argonne’s X-ray Science Division (XSD). “We are designing all-new optics for the nine new beamlines. There are no existing optics we can re-use for them.”

Following the upgrade, the APS will generate an x-ray source that is much smaller than the one the facility delivers now. Assoufid and his team are charged with designing a system that will allow scientists to focus that very bright beam down even further, to incredibly small sizes. The system must do so while preserving the x-rays’ coherence as well. Coherence is the quality of light that allows it to carry information when it bounces off of surfaces. When these upgraded x-ray beams diffract off of a sample, they will deliver more info about that sample to the detectors, resulting in a more detailed picture.

“We want to make sure that coherent beam is preserved,” Assoufid said. “I think that’s the biggest challenge. We want the mirrors to preserve the beam quality in the focusing optics. We want all this coherent light in a small spot size, to speed up measurement time.”

Xianbo Shi is a physicist with XSD, and he has been designing several of these new systems with the help of the staff at each beamline he works with. In total, he said, the APS Upgrade is going to require more than 1,700 lenses and nearly 60 highly polished mirrors. Each of the optical systems had to be specially designed to exacting detail. So exacting, in fact, that the technology did not exist to design them efficiently – the APS Upgrade optics team had to develop their own software, improving on the state of the art, before they could move forward.

“At each step, we use the best software and develop on top of it,” Shi said. “We have to design the software so we can design the optics.”

The mirrors that have been designed, Shi said, are the most demanding state of the art in the world. There are only a couple companies in the world that can make them, he said, because in order to preserve the qualities of the beam, the mirrors have to be almost perfectly smooth. This goes beyond traditional mechanical chemical polishing and into removing atoms from their surfaces one by one.

In fact, Assoufid said, there is only one company in the world that can deliver the smoothness some of these mirrors require. About 20 of the mirrors needed for the upgrade will come from this company, he said. It takes about year to make mirrors like these, and if they don’t pass inspection, the company will need to start over almost from scratch.

The lenses don’t need to be quite as smooth, Shi said, but their design and manufacture is still extremely detailed. The lenses are concave, which means they curve inwards. That curve needs to be created exactly to design specifications so that they focus the beam as intended.

The optics team has also been developing technology using artificial intelligence to allow some beamlines to change the size of the beam quickly and precisely, without needing the scientists to make adjustments. ATOMIC, one of the new feature beamlines, is designed to probe the structural, chemical and physical properties of samples with unprecedented precision. Sometimes that will require scientists focusing the size of the beam on the fly.

“Zoom mirror optics means it needs two pairs of focusing mirrors, so the beam size can change at the sample,” Assoufid explained. “Beamline scientists don’t have time to align the mirrors, so it has to be done automatically. If they want to focus the beam in one spot, and then change the size, they can image their sample at different scales.”

The mirrors and lenses needed for the APS Upgrade are so precise that some of them can only be tested in an actual x-ray beam. As they arrive at the Lab from the companies making them, the team will be verifying them at Sector 1 of the APS as well as performing the traditional optical metrology. Each mirror takes up to a week or more to test, and the team had to develop new tools and technology to do this. They have also been creating new diagnostic systems for each of the beamlines, measuring what previously could not be measured.

“The beam quality is important, so we need a way to measure it,” Shi said. “So we spent some effort on developing a new wavefront testing technology. It improves on the state of the art. We can monitor the beamline when changing optics and gather information to control those optics.”

The new mirrors, lenses and other equipment will be installed during the one-year period when the APS is shut down for upgrade construction. The installation period is scheduled to begin in April 2023. When the new optics system is finished, Assoufid said, the effect will be like giving the APS a new pair of glasses. What was once blurry and hard to see will now snap into focus.

“I will be happy when we see first light,” he said. “We’ve made a lot of progress, but there’s a lot of work to be done. I’m excited, but I will be fully satisfied when it’s all finished.”