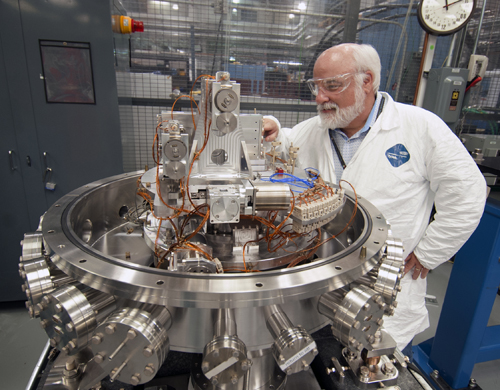 After earning his Ph.D. in physics at the University of Illinois at Chicago, Tim spent his entire professional career at Argonne beginning as a graduate student in the Physics Division, then as a postdoc at the Advanced Photon Source (APS), a senior research associate and senior scientist at the University of Chicago’s ChemMatCARS x-ray beamlines at the APS, and beamline manager for the Dynamic Compression Sector (DCS) shock-physics research facility at the APS (with an appointment as a Research Professor at Washington State University, which operates DCS).

Tim loved classic old black and white movies, specifically the 1930’s monster movies like Dracula. This led him to produce his own film as a 4th grader. He collected large theatrical movie projectors and enjoyed showing his library of old classics to his nephews and nieces. Tim had a passion for music, particularly the Beatles. He was a talented musician from his days in high school bands where he played his favorite instrument, the guitar. More recently, he played bass and keyboards in local bands. Tim loved hosting big family parties. His Christmas parties are cherished memories for all the extended family.