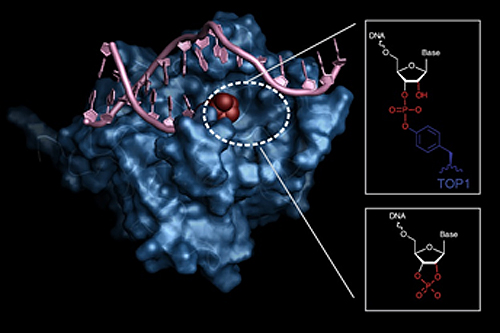 The original National Institute of Environmental Health Sciences article by Kelley Christensen can be read here.

Each year, a review panel selects a paper deemed to have the highest scientific impact that was published by a SER-CAT member. “This award is a real honor,” Williams said. “We have been using the SER-CAT facilities since 2010, and this resource has been critical for our research.”

He explained that his lab routinely uses synchrotron radiation to visualize proteins and protein-DNA complexes at the near atomic scale.

Williams aims to understand how DNA repair mechanisms can be used in treatment of diseases like cancer. He uses a technique called macromolecular crystallography to study how the body recognizes when DNA is damaged after environmental exposures, and how it is repaired.

He also studies how mutations affect proteins that protect genome stability, in syndromes that predispose certain people to cancer or neurological disease.

“The SER-CAT Outstanding Science Award for 2021 to Scott Williams is a well-deserved high honor and a testament to his success in solving structures through the SER-CAT,” said Bill Copeland, Ph.D., head of the Genome Integrity and Structural Biology Laboratory. Williams is in good company ― in 2014, his colleague Samuel Wilson, M.D., won the award.

“Williams’ group has published over 50 structures in 20 papers during his time at NIEHS — all of which have benefitted from SER-CAT,” Copeland noted. Williams earned the SER-CAT Outstanding Science Award for his paper “Endogenous DNA 3’ blocks are vulnerabilities for BRCA1 and BRCA2 deficiency and are reversed by the APE2 nuclease,” published last year in the journal Molecular Cell.

As a graduate student studying at the University of Alberta (Canada), Dr. Williams traveled to the APS where he obtained hands on training in macromolecular X-ray crystallography, and determined the first molecular structures of the BRCA1 tumor suppressor from data collected at the APS BioCARS beamlines. The current research extends this early work and was part of a multidisciplinary collaboration with Dan Durocher, Ph.D., from the University of Toronto. The team reported that cancer cells with mutated BRCA1 and BRCA2 genes died when they lacked a protein called apurinic endonuclease 2 (APE2). This knowledge could be applied to personalized medicine in the future and potentially improve breast cancer outcomes.

On March 18-19, Williams participated in the St. Jude-SERCAT Structural Biology Symposium, which occurred virtually this year. During his award lecture, Williams discussed his lab’s work with SER-CAT beamlines to determine the molecular structure of the APE2 nuclease, a new promising anti-cancer drug target.

The National Institute of Environmental Health Sciences (NIEHS) is expanding and accelerating its contributions to scientific knowledge of human health and the environment, and to the health and well-being of people everywhere.

The Advanced Photon Source is a U.S. Department of Energy (DOE) Office of Science User Facility operated for the DOE Office of Science by Argonne National Laboratory under contract no. DE-AC02-06CH11357. SER-CAT is supported by its member institutions, and equipment grants (S10_RR25528, S10_RR028976 and S10_OD027000) from the National Institutes of Health.