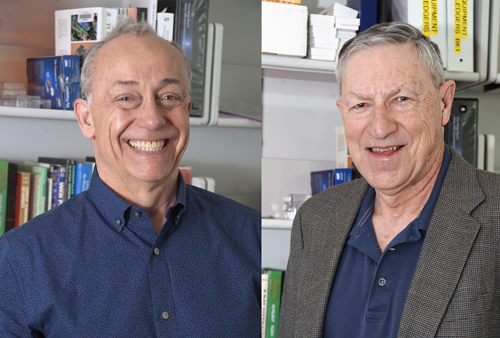 Mark L. Rivers is a Research Professor in the Department of the Geophysical Sciences and Center for Advanced Radiation Sources (CARS) at The University of Chicago, and currently the Executive Director of CARS.

Stephen R. Sutton is also a Research Professor in the Department of the Geophysical Sciences and Center for Advanced Radiation Sources at The University of Chicago, as well as a Research Associate in the Earth Sciences Section of The Field Museum in Chicago.

Together, the two scientists have co-directed the design, construction, and operation of the GeoSoilEnviroCARS (GSECARS) Sector 13 at the Advanced Photon Source, which provides users with high-pressure diffraction and spectroscopy, x-ray microprobe, x-ray absorption spectroscopy, and microtomography research techniques.

Rivers and Sutton were nominated for their “sustained efforts over the past three decades [which] have ensured that a national and international community of scientists have access to some of the most advanced x-ray analytical facilities and techniques, enabling thousands of scientists to conduct cutting edge research in geochemistry, cosmochemistry, petrology, mineralogy, and mineral/rock physics for environmental, Earth, and planetary sciences. Collectively, Mark and Steve’s work represents a remarkable contribution that has been an extraordinary benefit to a broad scientific community.

“Today virtually all x-ray-based analytical instrumentation and techniques in demand by earth, planetary, soil and environmental scientists are available at GSECARS. These broad and unique capabilities have allowed groundbreaking experiments to be conducted in high-pressure mineral physics and chemistry, properties of melts and other non-crystalline materials, chemistry and physics of magmas, inorganic reactions at the mineral-water interface and other environmentally relevant processes, biogeochemistry, and flow dynamics of fluids and solids.

“With this range of capabilities, the GSECARS beamlines remain some of the most highly productive x-ray beamlines in the world. In the past five years, over 1000 unique outside users (62% students and post-docs) have visited GSECARS, conducting over 1,500 experiments and resulting in more than 600 publications. The published work to which GSECARS has contributed has led to major advances in our knowledge of a wide range of phenomena, greatly advancing our understanding of the surface and interiors of the Earth and other planets as well as bodies of extrasolar origin.

“Over the last 30 years, Steve and Mark’s combined and individual work have had a sustained, profound and lasting impact on many areas of science. Their efforts have delivered state of the art synchrotron x-ray tools into the hands of earth scientists and established a new and now ubiquitous community who have used these tools to shine light on previously inaccessible, complex earth science problems, resulting in major advances in the understanding of the Earth, other planets and beyond.”

Arthur H. Compton was an American physicist who won the Nobel Prize for Physics in 1927 for discovering and explaining changes in x-ray wavelengths resulting from x-ray collisions with electrons, the so-called Compton effect. This important discovery in 1922 confirmed the dual nature (wave and particle) of electromagnetic radiation. A Ph.D. from Princeton University, Compton held many prominent positions, including professor of physics at The University of Chicago and chairman of the committee of the National Academy of Sciences that studied the military potential of atomic energy. His position on that committee made Compton instrumental in initiating the Manhattan Project, which created the first atomic bomb.

GeoSoilEnviroCARS is supported by the National Science Foundation – Earth Sciences (EAR – 1634415). The Advanced Photon Source is a U.S. Department of Energy (DOE) Office of Science User Facility operated for the DOE Office of Science by Argonne National Laboratory under contract no. DE-AC02-06CH11357.