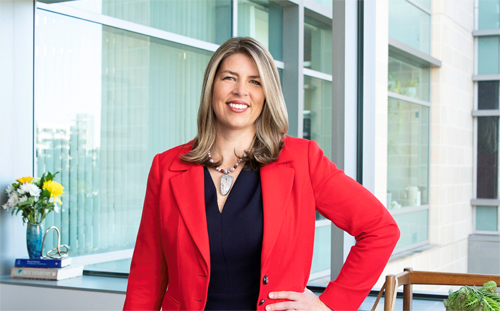 The original La Jolla Institute for Immunology press release can be read here.

Erica Ollmann Saphire has been appointed President and CEO of La Jolla Institute for Immunology (LJI). Dr. Saphire will become La Jolla Institute’s fifth president when she formally begins her term on September 1, 2021. She will succeed current LJI President Mitchell Kronenberg, who has successfully led the organization for the past 18 years.

Dr. Saphire is a long-time user of the U.S. Department of Energy’s Advanced Photon Source (APS) at Argonne National Laboratory. She is co-author on 22 peer-reviewed journal articles based on her research at the APS, which has centered on the study of viruses, particularly the Ebola virus. Her research has been carried out at a number of APS molecular x-ray crystallography beamlines, including those operated by the National Institute of General Medical Sciences and National Cancer Institute, the Structural Biology Center, the Life Sciences Collaborative Access Team, and the Northeastern Collaborative Access Team.

“I am deeply honored to be asked to carry La Jolla Institute forward and lead such an exceptional group of immunologists and staff,” said Saphire. “LJI shines as one of the top immunology research organizations globally. I am excited to build on the Institute’s tremendous legacy of scientific excellence and tackle humanity’s most pressing health challenges.”

Saphire is currently a professor in LJI’s Center for Infectious Disease and Vaccine Research and the Director of the Coronavirus Immunotherapy Consortium (CoVIC), which united academics, non-profits, small and large biotechs, and major corporations from around the globe to address the urgent need of identifying the most efficacious antibody therapeutics to prevent and treat COVID-19.

Throughout her career, Saphire had her sights firmly trained on the global threat of highly infectious diseases. Before CoVIC, she galvanized the Viral Hemorrhagic Fever Immunotherapeutic Consortium (VIC), a multidisciplinary, five-continent collaboration of former competitors that together accelerated the research pipeline against emerging viral threats such as Ebola and Lassa. In her own lab, Saphire studies the three-dimensional structures that drive immune recognition and protection. Her research reveals where viruses are vulnerable, how a successful immune response can be mounted, and draws the blueprints for better vaccines and treatments.

In her new role as president, Saphire will capitalize on the Institute’s focus on human immunity and the depth of expertise to recruit new faculty in strategic areas, foster diversity, talent, innovation, and financial strength to bring to bear the power of our immune system on heart disease, autoimmunity, cancer, and infectious disease. Dr. Saphire will maintain her research laboratory during her presidency.

“My fellow directors and I are thrilled that Dr. Saphire will be leading La Jolla Institute into what will undoubtedly be a very successful future that brings us closer to our ultimate goal of Life Without Disease. She is a remarkable scientist and visionary leader who brings a unique combination of skills to her new position,” said Eric Zwisler, Chairman of LJI’s Board of Directors. “We also would like to express our sincerest thanks to Mitch, who, for the last 18 years, has guided the Institute with extraordinary vision, deep passion and strategic brilliance, and built it into a world-renowned scientific powerhouse.”

During his tenure as president, Kronenberg led the Institute through an important period of expansion and growth. On his watch, the number of faculty grew by 30 percent, while the Institute’s operational budget tripled. Today, the Institute is not only ranked among the top research organizations in the field of immunology based on its scientific impact, but is also widely regarded as one of the best places to work in academia.

Kronenberg will retain his position as Chief Scientific Officer at the end of his term as President and CEO and will remain a key member of the faculty at the Institute as he continues to lead his own productive lab.

“It’s been tremendously rewarding and a great privilege to serve as the Institute’s president and I am proud of the groundbreaking research advances made by the many dedicated and immensely dedicated individuals here at the institute during my time in office,” said Kronenberg. “Now, I am looking forward to entrusting LJI’s future into Erica’s hands. I couldn’t have wished for a more worthy and inspiring successor, and I am confident that she will lead the Institute to new heights.”

The La Jolla Institute for Immunology is dedicated to understanding the intricacies and power of the immune system so that we may apply that knowledge to promote human health and prevent a wide range of diseases. Since its founding in 1988 as an independent, nonprofit research organization, the Institute has made numerous advances leading toward its goal: life without disease.