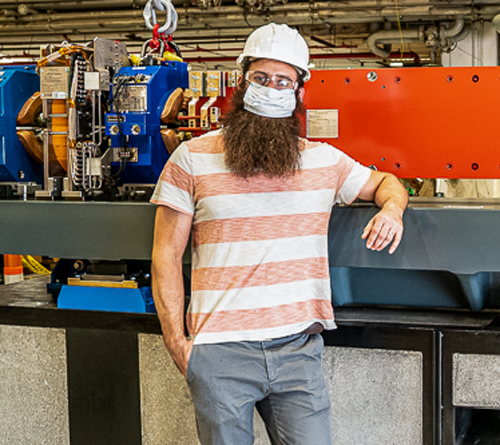 Jeremy Nudell has always enjoyed taking things apart and putting them back together.

Even as a child, his passion was uncovering the way mechanical systems work. So it’s hard to imagine a more fitting job for him than the one he has: Nudell is a mechanical engineering specialist, helping to design and build a comprehensive upgrade to the Advanced Photon Source (APS), a U.S. Department of Energy (DOE) Office of Science User Facility at Argonne National Laboratory.

The APS is a massive and complex machine. It creates ultrabright X-ray beams by circulating electrons around a ring more than two-thirds of a mile around. But if you were to take that ring apart, you’d find that it’s made of smaller pieces: hundreds of powerful magnets connected together into modules, and then strung together like beads on a bracelet.

The upgrade to the APS will replace the entire ring with a state-of-the-art model, put together in the same way, module by module. Nudell’s job is to oversee the assembly of those modules before they are connected, and since the modules are made up of magnets (which keep the electrons circulating around the ring) and vacuum systems (which keep the electron beam away from the interference of open air) he helped design, he’s excited to see them come together.

His team has conducted practice assemblies of magnet modules, but as he says, by spring of 2021 the upgrade project will be “go, go, go.”

“The first phase of research and development for the vacuum system started six years or so ago,” Nudell said. “That’s a significant part of my life. To see the design spinning around on a computer and then to finally see a 20,000-pound component sitting in front of you, that is satisfying.”

Nudell first came to Argonne nine years ago, as a co-op student at Northwestern University. He was drawn, he said, to the prospect of using his skills to enable basic research into materials and medicines that improve the daily lives of everyone.

“I worked at the beamlines designing awesome mechanical devices for scientists to find out more about how the world works,” he said. “That’s similar to everyone who works at Argonne. They’re interested in bettering society.”

Nudell began working on the APS Upgrade project a few years later, joining a team endeavoring, as he says, to design a new APS electron storage ring from scratch. He worked with teams designing both the magnet and vacuum systems, and eventually moved into his current position overseeing the assembly of the modules. Each module contains several powerful magnets, some weighing as much as an SUV, which are gently lowered into place using enormous overhead cranes. e wo

Each sector of the upgraded APS will host five of these modules, connected to concrete and steel plinths. There are 40 sectors in total, and each of the 200 modules must connect to its neighbors with extraordinary precision. The centers of the magnetic fields generated must align to within half the width of a human hair. The vacuum systems must also be precisely installed. If they are off by a fraction of a millimeter, the system will fail.

All of this, Nudell said, is exciting and stressful.

“We’re now in a part of the project experience that not many of us have been through before,” he said. “I’m overseeing the work of a team of technicians, engineers and a supply chain coordinator in a 100,000-square-foot warehouse. I don’t know if I will ever have the chance to do anything like it again.”

Just like the smaller components that make up the whole of the storage ring, it is the collaborative nature of the team at Argonne that makes it work so smoothly, Nudell said. The upgrade team has learned from other facilities, both within the United States and around the world, he said, and the Argonne engineers constantly learn from each other.

“There is always someone to go to at Argonne who is an expert in their field,” he said. “Designing a water system to feed into all the magnets? We have an expert. Doing vibration measurements to the nanometer level? We have an expert. We have so many experts in so many different fields that we could design anything.”

Nudell loves taking things apart so much that he spends his free time doing the same thing. His latest project was a 1950s Honda motorcycle, which he disassembled, sandblasted and reassembled. There’s no doubt this is what makes him happiest, and he’s looking forward to seeing the APS Upgrade project, well, come together.

“There will be nothing more satisfying than flipping the switch and finally getting electrons through this complex machine we have been designing for years,” he said. “My day to day is engineering and seeing what I designed get built and work, but it’s all part of a larger picture. That’s an amazing aspect to what we do.”

The original APS Upgrade story can be read here.