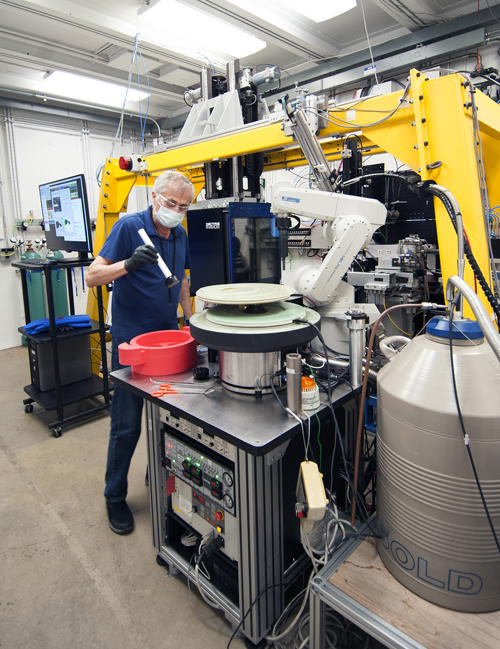 The original University of Chicago “uchicago news” story by Louise Lerner can be read here.

A unique partnership among biologists, chemists, and x-ray scientists at The University of Chicago and the U.S. Department of Energy’s Advanced Photon Source (APS) at Argonne National Laboratory has zeroed in on several molecules that could be used to create drugs to fight COVID-19. Their results, published in Nature Communications, help scientists understand the shape and structure of the virus and how it works—and how it can be blocked. (See the APS science highlight “The Structure of a Key Viral Enzyme Helps Identify Novel Drugs for Treatment of COVID-19”).

Several existing drugs, originally designed for other viruses, have proven to be able to combat COVID-19. But no drugs have yet been tailor-made to specifically fight COVID-19.

“We started worrying about potential scenarios where the virus mutates or the vaccines don’t pan out,” said Bryan Dickinson, an associate professor of chemistry at The University of Chicago and one of the scientists on the team. “Thinking about this improbable but scary future, we realized there were things we could do to help.”

“It’s very early stages still, but some of these molecules look really promising,” said Scott Snyder, another collaborator. “Whatever happens in the future, we want as much information as possible about how these COVID-19 proteins can be blocked.”

Because COVID-19 is new to humankind, scientists have had to start entirely from scratch. They don’t know how the virus works on the molecular level.

Though early on Chinese scientists sequenced the virus’s genes, which encode for how to assemble the viral proteins from its constituent amino acids (AA), that’s only part of the puzzle. Knowing the genes is kind of like having a list of the Legos (AA) used to build a model ship (protein); what the components look like when assembled is an entirely different matter. To design a molecule that blocks the virus from doing its work, scientists need to find out what shape the “Legos” make.

This process is called macromolecular x-ray crystallography (MX). A scientist has to crystallize the COVID-19 proteins, and then use enormously powerful x-rays to get an atomic-level photograph. The process is tricky, in part because some proteins just don’t want to crystallize.

Luckily, Argonne Distinguished Fellow and head of the Structural Biology Center (SBC-XSD) at the APS Andrzej Joachimiak is a master decipherer. “He is just an incredible crystallographer,” said Dickinson. “He can get crystals out of whatever you hand him.” The Structural Biology Center is operated by Argonne for the U.S. Department of Energy Office of Science’s Office of Biological and Environmental Research.

In this case, the team was looking at PLpro, a particular enzyme in SARS-CoV-2 that is thought to play an important role in how the coronavirus matures its proteins and copies itself. But the protein has resisted early attempts at crystallization.

Joachimiak and his team, however, found a mutation that made the crystals much easier to grow. Then they employed MX to obtain x-ray diffraction data from the crystals at the SBC-XSD 19-ID x-ray beamline at the APS, a DOE Office of Science user facility at Argonne, to obtain an exact atomic three-dimensional map of the protein.

With this map in hand, chemists can start coming up with potential molecules that could latch onto PLpro and block its work. Off the data went to The University of Chicago, to the labs of Dickinson and Snyder.

Snyder specializes in creating new molecules and coming up with new ways to build them. Though he had no prior experience designing molecules to fight viruses, he and his lab members threw themselves into the work—synthesizing and providing hundreds of potential molecules for Dickinson’s lab to analyze and test. The best candidates then go in for further rounds of tweaking and testing.

“Amazingly,” Snyder said, “two subsets of them really stuck out.”

These molecules were good at inhibiting COVID-19 enzymes from doing their jobs, in small cells at the lab. To replicate real-world conditions more closely, the baton was passed to a fourth member of the collaboration: Glenn Randall, a microbiologist who tested these compounds directly against live samples of the virus in a secure biosafety facility.

The molecules indeed were able to slow the replication of COVID-19.

Buoyed by the results, the entire team has redoubled their efforts to make the molecule work even better. They are still iterating, constantly ferrying samples between the university and the national laboratory to be tested and scanned.

“Our hope is to build a tenfold better inhibitor,” Snyder said. “I think the pieces are now there.”

There are still many steps before the molecules become drugs, but the collaboration sees this as vital work. “A lot of pharmaceutical companies have moved away from doing this kind of work, because it’s so early-stage,” Dickinson said. “But we have a strong collaboration between Argonne and UChicago that has grown exponentially in the past few months. All the components are here.”

“I’ve been collaborating for 25 years, but never have things come together so quickly,” said Joachimiak, who co-directs the Center for Structural Genomics of Infectious Diseases at Argonne. “It’s been amazing to see people’s willingness to devote their time and ideas. I love this kind of science.”

We thank the members of SBC-XSD, especially Darren Sherrell and Alex Lavens for their help with setting beamline and data collection. Funding for this project was provided in part by federal funds from the National Institute of Allergy and Infectious Diseases, National Institutes of Health,  Department of Health and Human Services, under Contract HHSN272201700060C  (to A.J.) and by the U.S. Department of Energy (DOE) Office of Science through the National Virtual Biotechnology  Laboratory, a consortium of DOE national laboratories focused on response to  COVID-19, with funding provided by the Coronavirus CARES Act (to A.J.). The Structural Biology Center is operated by Argonne for the U.S. Department of Energy Office od Science, Office of Biological and Environmental Research under contract DE-AC02-06CH11357. Funding for the synthesis and biochemical studies was provided by a “BIG” Award from The  University of Chicago, The University of Chicago Women’s Board, the National  Institutes of Health (TM GM08720, Predoctoral Training Program in Chemistry and  Biology, graduate fellowship to C.A.T.), the National Institute of General Medical  Sciences (R35 GM119840 to B.C.D.), and start-up funds from The University of  Chicago (S.A.S.). This research used resources of the Advanced Photon Source, a U.S. DOE Office of Science User Facility operated for the DOE Office of Science by Argonne National Laboratory under contract no. DE-AC02-06CH11357.