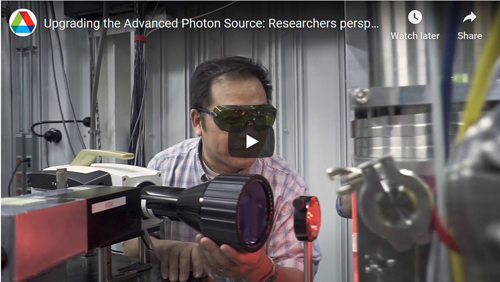 From chemistry to materials science to COVID-19 research, the APS is one of the most productive X-ray light sources in the world. An upgrade will make it a global leader among the next generation of light sources, opening new frontiers in science.

In the almost 25 years since the Advanced Photon Source (APS), a U.S. Department of Energy (DOE) Office of Science User Facility, first opened at DOE’s Argonne National Laboratory, it has played an essential role in some of the most pivotal discoveries and advancements in science.

More than 5,000 researchers from around the world conduct experiments at the APS every year, and their work has, among many other notable successes, paved the way for better renewable batteries; resulted in the development of numerous new drugs; and helped to make vehicles more efficient, infrastructure materials stronger and electronics more powerful.

Research conducted at the APS has also directly led to two Nobel Prizes, and contributed to a third. Most recently, the APS is making significant contributions in the fight against COVID-19. Its beamlines are involved in research to both identify the protein structures of the virus and find potential pharmaceutical treatments and/or vaccines. Such work makes clear the ongoing importance of X-ray light sources, like the APS, in solving critical problems for our world.