Northwestern, Argonne, and Partners to Launch National Resource to Unlock the Role of Metals in Human Health 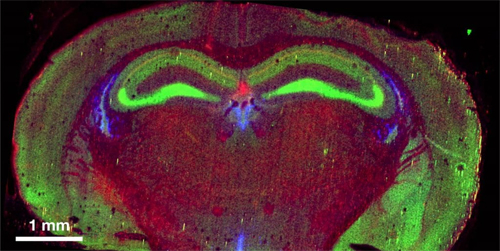 The original Northwestern University press release can be read here.

The Chemistry of Life Processes Institute (CLP) at Northwestern University, the Advanced Photon Source (APS) at Argonne National Laboratory, and several leading research universities will join forces to launch a first-ever national hub for interdisciplinary, metallomics research and innovation, the Resource for Quantitative Elemental Mapping for the Life Sciences (QE-Map). Bolstered by the award of $8.2 million by the Biomedical Technology Research Resources (P41) program at the National Institutes of Health (NIH), QE-Map will enable unprecedented insights into the role of metals and other inorganic (non-living) elements in human health and disease.

QE-Map will leverage Northwestern’s expertise in the areas of biophotonics, cell biology, inorganic chemistry, and x-ray physics, to pioneer cutting-edge imaging and detection technologies to deepen understanding of the interplay between metals and biological processes.

“Metal fluctuations play a critical regulatory role in a large number of biological processes,” said O’Halloran, the founding Director of CLP and the Director of Northwestern’s Quantitative Bioelement Imaging Center (QBIC).  “For example, fluctuations in the availability of zinc or copper can often be a trigger to the cell to change its function or developmental stage. A fluctuation in zinc might signal an egg to ovulate, or a second sperm, not to enter the egg. Too much manganese in the brain can trigger Parkinson’s disease. Pathological iron chemistry in the brain is involved in Alzheimer’s disease, and so on. These findings have generated a tremendous amount of interest across the fields of medicine, biology and physiology.”

The Resource will support 75 faculty research programs, across Northwestern’s Schools of Medicine, Engineering, and College of Arts and Sciences, as well as collaborators from Argonne, the Howard Hughes Medical Institute’s Janelia Research Center, Georgia Tech, Johns Hopkins University, MIT, the University of California, Berkeley, the University of South Carolina, and the University of Texas at Austin.

Investigators will provide the testbeds for new imaging technologies, tools, software, and quantitative methods for metal analysis and localization.  These new approaches will be applied to pioneering research in cardiac disease, fertilization and development, neurodegenerative diseases, and metabolic diseases.

“The ability to map metals and metal dynamics in the brain opens important new avenues in neuroscience research, for neurodevelopmental and neurodegenerative diseases but also for the fundamental understanding of how neurons communicate,” said Yevgenia Kozorovitskiy, Assistant Professor of Neurobiology at Northwestern. “The field has focused on calcium signaling in neurons for a long time, but zinc and other metals serve critical synaptic signaling roles in neurons that remain poorly understood, in addition to their functions as co-factors for important neuronal proteins.”

A new mass spectrometry tool operated by QBIC will enable rapid 2D and 3D imaging of cells in tissue slices. Advances will include development of a completely integrated system with real-time multi-element imaging capabilities, standardized procedures for handling cryogenically preserved biological tissues, and a universal cryo sample mounting system that can move between several different technologies that map and analyze elemental distributions.

“We want to push further the boundaries of what can be done with x-ray imaging and apply it to biological systems,” said Jacobsen, a member of the Northwestern Chemistry of Life Processes Institute. “The APS at Argonne is a great way to excite that x-ray florescence with a much higher rate and much higher spatial resolution than ever could be done in a laboratory system.”

A third Resource technology, Photo Acoustic Spectroscopy (PAM), is pioneered by Zhang and Sun. PAM deploys a highly novel, modular ultrasonic detector that combines a unique chemical process to image both frozen samples and live tissue at unprecedented resolution. This approach works by scanning a laser across a sample, causing heat and color intensity to increase, and triggering a shockwave that can be detected acoustically.  Cheng and Sun will work with collaborators to engineer molecular probes that cater to specific experimental needs. These advances will provide better ways to image time-dependent fluctuations in the concentrations of specific metal ions.

“It’s almost like hearing the sound of a color,” said O’Halloran. “There are disorders of the human brain where sensory inputs get confused between them, but in this case, we’re actually using the absorbance of a photon of a certain wavelength of light, which gives rise to the observation of a color, creating a sound wave that will help us localize an image in the material. By listening to the photo acoustic detectors, we can create a map from the sound pattern. It’s an incredible idea that has never been shown before.”

QE-Map will occupy a unique place among the 40 NIH-funded national resources as the only one advancing technology for studying the role of metals in health and disease.

“We will be collaborating with dozens of biomedical research teams from around country with the goal of understanding the molecular mechanisms at work in a variety of metal-linked diseases, from Wilson disease, Menkes disease, and Alzheimer’s, to Parkinson’s, heart disease, and diabetes,” said O’Halloran. “Each of the investigative teams around the country have a particular question in which they need to know how much metal is in their sample and what is it doing to the sample. We can help answer all those questions.”