Like Humans, Grasshoppers Grapple With Gravity’s Effects on Blood Pressure 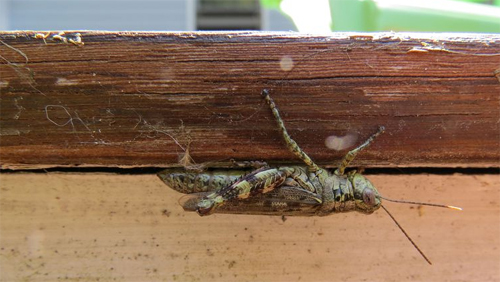 From the Smithsonian Magazine SMARTNEWS

When push comes to shove, we humans are just giant sacks of fluid. Weighed down by gravity, our internal liquids would simply slosh and pool in the parts of our anatomy closest to the ground, if not for the wonders of the circulatory system: an intricate network of vessels, wreathing a central, pumping heart that’s always around to balance the blood back out.

But grappling with gravity isn’t just a conundrum for us hefty mammals. Teeny, lithe insects with vastly different body plans must cope with these forces as well—and now, researchers are finally starting to understand how.

Reporting this week in the journal Proceedings of the National Academy of Sciences, a team of insect physiologists at Arizona State University has found that grasshoppers, too, use their bodies to fight the perils of gravity. That’s especially surprising because, unlike us, their lymph—basically, invertebrate blood—isn’t held in vessels that can contract and expand to regulate flow. Instead, grasshoppers appear to use an insect-specific combination of tricks to redistribute the liquid in their bodies.

“This study shows that grasshoppers have amazing control of their body pressure at different orientations,” David Hu, who studies the intersection of physics and biology in animals at Georgia Tech, but wasn’t involved in the study, tells James Gorman at the New York Times.

A team led by Jon Harrison first stumbled upon their discovery while examining grasshoppers in the linear accelerator at the Argonne National Laboratory in Illinois, a device that uses synchrotron X-rays to generate precise, high-quality images and video of its contents. While studying the insects' air sacs—which store, pump and exchange air like lungs—the researchers noticed that the structures ballooned or constricted in different patterns depending on what positions their owners took.