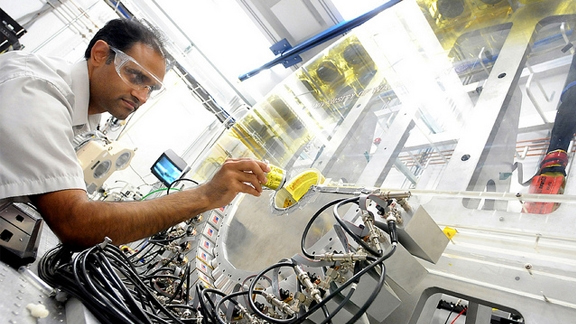 The original U.S. DOE article by Shannon Brescher Shea can be read here.

Billions of smartphone owners are familiar with the dreaded "low battery" symbol on their devices. While consumers groan, scientists are working to understand why and when lithium-ion batteries in phones, plug-in electric vehicles, and other applications lose charge or fail.

One of the best tools scientists are using in this investigation is x-rays from the Department of Energy's (DOE) advanced light sources. These light sources use beams of electrons to produce x-rays that are more than a billion times stronger than those at the dentist's office. Compared to weaker x-rays available in other facilities, the light sources allow researchers to gather more data in greater detail than they would be able to otherwise. Scientists are using these unique tools to examine how lithium-ion batteries function in real time.

From the Lab to the Road

In the 1990s, existing battery materials simply weren't suited for the level of power and performance needed for hybrid or plug-in electric vehicles. In response, researchers at DOE's Argonne National Laboratory used the Advanced Photon Source (APS), a DOE Office of Science user facility, to observe interactions within batteries at the atomic level for the first time.

The APS also lets scientists watch what's happening at the atomic level as batteries are charging and discharging. With this understanding, manufacturers can improve batteries' performance and lifetime and ultimately could craft more affordable and efficient electronics and plug-in electric vehicles.

Scientists do this by using the APS to look at batteries in situ, or while they are actually working. Previously, scientists ran tests on a battery, took it apart, and examined it under a microscope. In contrast, studying batteries in situ allows them both to watch atoms moving inside the battery and to measure the stability of the molecular structure during the charging and discharging process.

Once researchers supported by the Office of Science mapped out the fundamentals, they transferred the work to applied scientists supported by the DOE's Office of Energy Efficiency and Renewable Energy. That research led to a new cathode for lithium-ion batteries that was safer, more affordable, and able to store more energy than ever before. (The cathode is the positive electrode in a battery cell, which accepts lithium ions and electrons from the negative anode during discharge or use.) In fact, these advances were so significant that Chevrolet used the cathode in the first mass market plug-in electric vehicle – the Volt.

Both airport security machines and the APS produce "hard" x-rays, which are higher energy with shorter wavelengths (less than 1 nanometer or 1/100,000th the thickness of a piece of paper). Hard x-rays are very good at penetrating materials and looking at atomic structures.

In contrast, "soft" x-rays are lower energy with longer wavelengths (1-10 nanometers). While their wavelengths are too long to examine atomic structures, they provide "really exquisite chemical information," according to David Shapiro, a physicist at DOE's Lawrence Berkeley National Laboratory (LBNL). Using these x-rays, scientists can examine chemical states and these states' transformations within nano-materials. The Advanced Light Source at LBNL, a DOE Office of Science user facility, is one of the world's brightest sources of soft x-rays.

Each of these light sources allows scientists to study a different aspect of the lithium-ion puzzle.

"Every single technique has some sort of shortcoming with respect to the full story," said Jason Croy, a materials scientist at Argonne. "[But] each technique can be really powerful to give you certain bits of information."

In fact, researchers enjoy the challenge of piecing the diverse findings together.

"It's a great field because it utilizes the strengths of all of the facilities," said Shapiro.

Examining Batteries from Every Angle

Scientists from national laboratories, universities, and other research institutions are using the user facilities' exceptional instruments to dig deeper into lithium's interactions. The work at the three light sources is supported by DOE's Office of Science.

Understanding Dislocations at Argonne: Researchers at Argonne are building on the work that contributed to the Chevrolet Volt's cathode. The original study sought to understand the structure of lithium with manganese and other transition metal oxide forms before it went through multiple charge-discharge cycles.

Now, scientists are looking at how the battery's structure degrades over time. As the battery charges and discharges, the lithium ions move in and out of the anode and cathode. However, other atoms within the electrodes move as well, causing damage and reducing the battery's ability to deliver energy. Using the APS, scientists examined how these single atoms move and tracked how the structure changes with use.

Brookhaven Views Batteries in 5D: DOE's Brookhaven National Laboratory (BNL) recently added another dimension to battery research. They developed the most comprehensive look yet at batteries: a 3D chemical map at the nanometer scale that charts changes over time.

Normally, x-ray spectroscopy produces 2D images that show the average of what's going on across an entire sample. It doesn't show what's happening in individual layers.

"This is the first time [we can] in-situ monitor the phase transformation in 3D at nanometer scale in a working battery cell," said Jun Wang, a physicist at BNL.

Wang and her colleagues will continue their work at the NSLS-II, which will follow on from the original NSLS. The NSLS-II will eventually provide beams 10,000 times brighter than its predecessor, allowing scientists to study these reactions on an even finer time scale.

Fast vs. Slow Charging at Lawrence Berkeley: LBNL researchers are examining the same problem, but from a different perspective and using a different machine. Using soft x-rays from the Advanced Light Source (ALS), they're looking at how the speed of charging and whether a battery is charging or discharging affects the distribution and transport of ions.

A team of researchers from Stanford University, working with LBNL, built a nanoscale see-through battery that has one ten-billionth of the charge of a smartphone. It allows them to observe the movement of individual lithium ions.

Ideally, ions should distribute themselves evenly across the electrodes as they move back and forth. Unfortunately, they don't, causing stress in certain spots.

Building on this research, LBNL scientists may be able to reduce one source of damage to batteries, improving their performance and lifetime.

The Office of Science is the single largest supporter of basic energy research in the physical sciences in the United States and is working to address some of the most pressing challenges of our time. For more information please visit https://www.energy.gov/science/office-science.

Shannon Brescher Shea is a Senior Writer/Editor in the Office of Science, shannon.shea@science.doe.gov.