APS User Weaves Science into Her Art at the Loom 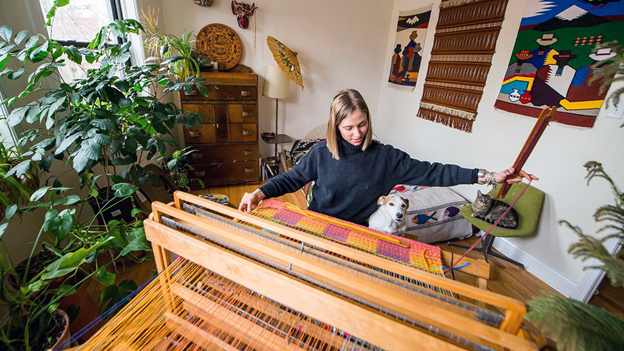 The original University of Chicago “uchicago news” article by Louise Lerner can be read here..

Light filters through large windows at Claire Zurkowski’s apartment, where she sits at her loom, weaving bright yellow-orange thread into a rug already filled with the colors of the rainbow.

Weaving is a bit like playing the piano; her feet tap the pedals and her hands move over the half-created rug stretched out on the wooden frame, pulling the shuttle back and forth through the multicolored threads. The colors and angles in her work reflected in the rocks and minerals sketched into her lab notebooks; her works are inspired by the refraction patterns of the crystals she studies as a graduate student in geophysical sciences at the University of Chicago.

“The way light travels through crystals is affected by atomic structure,” she says. “If light travels faster in one direction than another, you get these beautiful spectrums—light split in different directions like a prism.”

In her lab, Zurkowski takes samples of different crystals and subjects them to extreme pressures and temperatures to simulate the environment at the center of the Earth. No drill has ever reached more than halfway into even just the crust—the thin, outermost shell of the Earth—so there is still much we don’t understand about the innermost core. So her experiments seek to predict the most likely makeup of the molten rock at the core by recreating the elements and conditions there.

But as she thinks about the crystalline structures of the rocks, she also weaves the elements she studies into artistic pieces on the loom.

“The interference patterns I see in my experiments have been a really large factor in my recent work,” Zurkowski says. And her work to unravel the scientific mysteries behind the images is key to her creative process: “These patterns are visually beautiful, of course, but as I figure out why they look the way they do, I find it allows for a deeper appreciation of what I’m working on. It’s not just by looking at scientific images that I get inspiration, but by learning about them.”

Art has been a part of Zurkowski’s life for many years; as an undergraduate, she considered a degree in fashion design before being lured into math and physics. She has been weaving since 2013, when she learned a neighbor who raised sheep also had a garage full of looms for spinning and weaving.

The process starts with wool thread, which she dyes herself—mixing her own dyes in vats in the kitchen. After carefully drafting the pattern for the piece in her graph-paper sketchbook, alongside drawings of the atomic structures of minerals, she can start threading the loom. Each rug takes her about 15 hours of weaving.

It keeps her hands and mind busy, because even after she works out the math to create the piece, the weaving itself requires close attention.

“In order to get a pattern into the piece, you have to thread every strand of yarn through a different shaft of the loom that is picked up by a different pedal, and your pedaling sequence is what creates the variance of the pattern,” Zurkowski says. This means that the piece is never set in stone, she says: “As I’m working, I’m constantly looking and reflecting and readjusting and retying things—it’s much more an evolution of a piece.”

Just as science inspires her art

In her experiments, she aligns a tiny sample between the infinitesimally small tips of two diamond cells, then squeezes them together and heats the whole thing with lasers to simulate the intensely high-pressure, high-temperature conditions at the center of the Earth. (She recently broke the lab’s unofficial record for most pressure in an experiment, for one that ran at 236 million times higher than normal ambient pressure.) But positioning the diamonds is an extremely delicate process that has to be done while looking through a high-powered microscope.

“It requires a steady hand and not too much coffee,” she says, “but before I was weaving I did work in silversmithing and jewelry, so I had already had trained my hands to manipulate really small objects and gems.”

Attention to detail is important in both science and engineering work and in art, she says. “In my experience, it has really paid off to have trained your eye to notice small details.

Three times a year, she and her team travel to the UChicago-affiliated, U.S. Department of Energy’s Argonne National Laboratory, which gives her experiments an extra boost: a gigantic kilometer-circumferencee electron accelerator, the Advanced Photon Source, that serves as a very powerful microscope. There, at the GeoSoilEnviroCARS national user facility for earth science research, tiny individual particles of light smash into her samples in their diamond vises and are scattered in all directions. “You can piece together the patterns from the refraction, and that tells you about the molecular structure in really fine detail,” Zurkowski says.

Between the experiments at Argonne and the ones in her lab at UChicago, she’s uncovered quite a few interesting scientific questions.

“I’m really happy with how my work has turned out. It’s turned out to be a very fruitful line of inquiry,” says Zurkowski, surrounded by 3-D models of crystalline rock molecular structures and sketches of more. “Maybe why I’m churning out all these weavings—because I’m so excited about all the new things we’re finding out. There’s so much complexity to unravel.”

GeoSoilEnviroCARS is supported by the National Science Foundation-Earth Sciences (EAR - 1634415). This research used resources of the Advanced Photon Source, a U.S. Department of Energy (DOE) Office of Science User Facility operated for the DOE Office of Science by Argonne National Laboratory under contract DE-AC02-06CH11357.