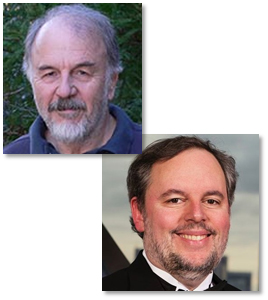 Two users of the U.S. Department of Energy Office of Science’s Advanced Photon Source (APS) at Argonne National Laboratory were named “Breakthrough Prize” winners in life sciences on Sunday evening, as part of an awards gala that brought together superstars of Hollywood, Silicon Valley and the scientific world.
Winning $3 million each were Harry F. Noller, Director of the Center of Molecular Biology of RNA at University of Southern California, and Stephen J. Elledge, Gregor Mendel Professor of Genetics and Medicine in the Department of Genetics at Harvard Medical School. Both have used the high-brightness X-ray beams at the APS in their work, Noller at the National Institute of General Medical Sciences and National Cancer Institute structural biology facility and  Elledge at the Northeastern Collaborative Access Team facility.
The Breakthrough Prizes started five years ago by a handful of top Silicon Valley investors and leaders: Google’s Sergey Brin and entrepreneur Anne Wojcicki; Facebook’s Mark Zuckerberg and his wife Priscilla Chan; and Russian entrepreneur and physicist Yuri Milner and his wife Julia Milner.The Advanced Photon Source is a U.S. Department of Energy Office of Science User Facility operated for the U.S. Department of Energy Office of Science by Argonne National Laboratory under Contract No. DE-AC02-06CH11357.