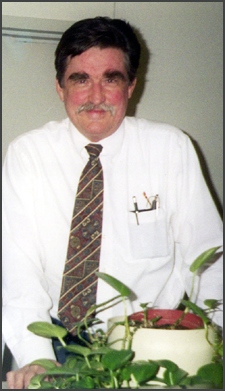 Antanas V. Rauchas, Director of the APS Operations Division, an Argonne employee since 1967, and an early and integral member of the team that designed and built the Advanced Photon Source (APS), died on Sunday, November 3, 2002, at Palos Community Hospital. He was 56.

Other than a one-year stint as an employee of the Admiral Corporation in Chicago, Tony, as he was universally known, dedicated his career to Argonne National Laboratory (ANL). He joined Argonne as a scanner in the High Energy Physics (HEP) Division after receiving a B.S. degree in communications engineering from the University of Illinois-Chicago in 1969. Between 1969 and 1979, Tony rose through the engineering ranks, moving from the HEP Division to the Accelerator Division, Zero Gradient Synchrotron (ZGS), where he was eventually appointed a Chief of Operations for the ZGS Operations Group. In 1981, he transferred to the Intense Pulse Neutron Source (IPNS) Division as an Electronics Engineer. Six years later, he was promoted to IPNS Accelerator Facility Manager. In 1990, he began his official involvement with the APS when he became Assistant Project Director for Controls and Integration in the APS Project Director's Office. In 1993 he was named Associate Division Director in the Experimental Facilities Division, and in 1999, Director of the newly formed APS Operations Division (AOD).

The breadth of Tony's curiosity and abilities, and his knack for integrating technical ingenuity and managerial imagination, is clear from only a partial list of his achievements at the ZGS alone: design and development of a beamline tuning program, beamline magnet and beam scintillator control systems, various programs for use in tune plotting and calculating possible betatron tune resonance conditions, a system to monitor various accelerator components and warn accelerator operators of a fault, the ZGS-Booster II injection synchronizer, and an external proton beam intensity measuring system. Throughout, Tony maintained a deep involvement with machine research experiments and found an outlet for his mentoring skills by assisting and guiding participants in the Argonne Honors Research Program in the preparation of their research projects.

In 1985, Tony began participating, on a part-time basis, in the development of the conceptual technical designs and cost/schedule details for what would become the APS. In 1990, Tony's involvement with the APS became full-time after he transferred to the APS Project and assumed the duties of Assistant Project Director for Controls and Integration, managing the Cost/Schedule and Project Engineering, Management Information Systems, Configuration Management, and Document Control groups. He was also called upon to participate in numerous project reviews, both internal and external.

After joining the APS Associate Laboratory Director's office in 1992, Tony helped prepare the APS Conduct of Operations Manual and assumed responsibility for development of the APS Linac Safety Assessment Document. He was appointed to the ANL Project Control System Task Force as a consultant on project management issues and participated in the development of technical designs and cost/schedule details for a feasibility study of a 1-MW spallation neutron source at Argonne.

In July of 1999, Tony took on what he called "the biggest challenge of my professional career" when he was named Director of the new APS Operations Division. Tony's eclectic intellect was the perfect complement to the varied responsibilities entrusted to this organization, everything from the beamlines that provide x-rays for users to the service organizations that see to the users well being, to the buildings that house them all.

Tony was always quick to publicly acknowledge "the excellent staff that ... provides the support and ideas that help the [AOD] organization grow. I think the way I contribute is to ensure that everyone is allowed to do their job with as little interference as possible."

"I think the way I contribute is to ensure that everyone is allowed to do their job with as little interference as possible."

J. Murray Gibson, Associate Laboratory Director for the APS, called Tony's passing "A terrible loss to the APS community. Tony was an inspiring leader of the APS Operations Division, and a superb manager. He was also a wonderful human being. We will all miss Tony very much, but his outstanding contributions to the Advanced Photon Source, Argonne National Laboratory, and the wider world outside will live on. "

Tony was an avid outdoorsman who, in winter months, could be found cross-country skiing in the Waterfall Glen Forest Preserve. He was also a lover of opera, which he joked "put the struggles of normal life into context."

Tony is survived by his wife, Aldona, and his daughter, Lina.

Donations in Tony's name can be made to the Vydunas Youth Fund, 14911 127th Street, Lemont, IL. Mrs. Rauchas has also expressed her feeling that a donation to any charity of one's choice is another way to honor Tony's memory.