Scott Benes is APS Supervisor of the Year 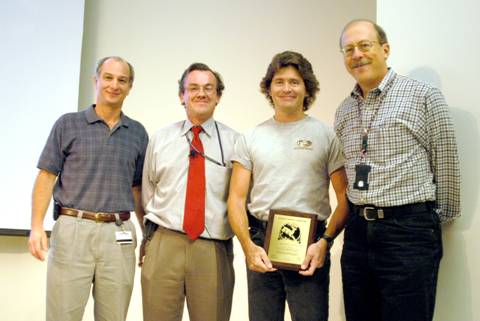 Scott Benes (Chief Technician, ASD-Controls) is the first winner of the Advanced Photon Source (APS) Supervisor of the Year award. Benes was surprised with the award during an APS “all-hands” meeting on September 28.

Benes, who has worked at Argonne for 13 years, was hailed by employees who work for him as “an outstanding supervisor [who] goes above and beyond the job, making sure we all know what has to be done and... taking the time to teach us new things that benefit us... [He] is easy to approach with problems... and he helps [resolve] problems quickly and efficiently. [He] has shown his management skills countless times... and deserves to win this award!” The nomination was signed by Ray Davis, Reginald Gilmore, and Sharon Farrell.

The award is given to the APS supervisor who is considered to be an outstanding manager by the people who work for her or him. The nomination form requires a short description and the signature of three employees who work for the supervisor. The selection panel for the award comprises the members of the APS Employee Advisory Committee, the group that first suggested the award and make final award recommendations to Murray Gibson, the APS Associate Laboratory Director.

“Good people management skills, such as mentoring, communication and leadership, are so important to the effectiveness of our organization. We are fortunate to have many outstanding supervisors at the APS, reflected in several strong nominations for this award. Our first line managers do most of the managing around here, and so it is my particular pleasure to recognize Scott, who embodies the values that management and employees look for in an outstanding supervisor,” said Gibson.