Reaching for answers to questions about the heart 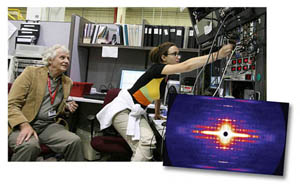 Stretch activation is very important in human heart muscle when contraction of one part of the heart stretches adjacent muscle tissue causing it to respond a moment later by generating more force aiding cardiac "ejection," i.e., the amount of blood pumped per beat. Muscle structure and function can be studied using high-brilliance x-ray beams, such as those produced by the APS, and the experimental technique time-resolved small-angle fiber diffraction.

Unfortunately, cardiac muscle is relatively poorly ordered and the diffraction patterns relatively uninformative. Fortunately, because of its physiological properties, the flight muscle of insects can be a good model system for cardiac muscle, and because of its high degree of structural order, produce rich and informative (not to say beautiful) diffraction patterns (right). Muscle contracts by the cyclical action of motor proteins called myosin that bind to particular sites on another protein called actin. This interaction is normally prevented by tropomyosin, a large, rodlike protein that blocks the myosin binding site on actin turning the system "off." Reedy and Bekyarova are carrying out experiments aimed at determining the motion of tropomyosin and how it turns the muscle "on" and "off" during the process of stretch activation. (Photo: Tom Irving, IIT)