A new technique for high-resolution x-ray scattering spectroscopy developed at the Advanced Photon Source has garnered an award for innovation in synchrotron radiation research. Ralf Röhlsberger, Professor of Physics at the Technische Universitaet Muenchen, is a recipient of the "Innovationspreis Synchrotronstrahlung 2002" ("Innovation Prize in Synchrotron Radiation 2002") prize awarded annually by the Friends of BESSY. The award, which honors "new developments in the field that provide access to and use of synchrotron radiation," was presented for Röhlsberger's "groundbreaking work in the nuclear resonant scattering of synchrotron radiation," the so-called "Nuclear Lighthouse Effect," a method that opens new avenues for spectroscopic investigations.

The studies were carried out at the Synchrotron Radiation Instrumentation Collaborative Access Team sector 3 beamlines by Röhlsberger (then a postdoctoral fellow) and his colleagues, K. W. Quast, T. S. Toellner, P. L. Lee, W. Sturhahn, E. E. Alp, and E. Burkel, who published their results in the Phys. Rev. Lett.

The method of the Nuclear Lighthouse Effect uses a sample that is spinning at up to 35,000 rotations per second. Incoming x-rays are not re-emitted in the forward direction but depending on lifetime of the excited nuclear state and the rotation speed of the sample, sweeping over a certain angular range, similar to the rays of illumination from the lighthouses that are navigational aids to ocean-going ships. Using this method, magnetic materials, for example, may be measured with extraordinary precision without operating the synchrotron radiation source in a particular bunch mode. 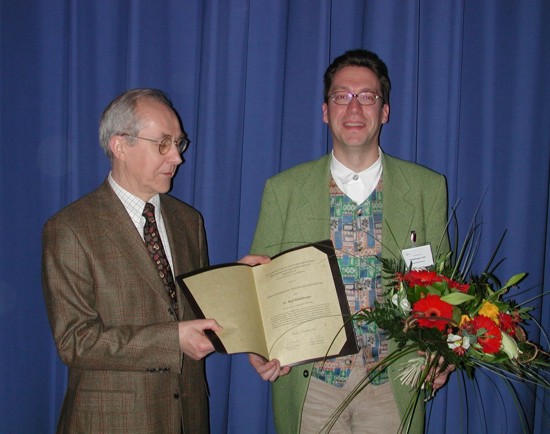 The award notes that the lighthouse effect is but one prominent part of Röhlsberger's body of "unusually successful works," which enable new and elegant experiments with synchrotron radiation.