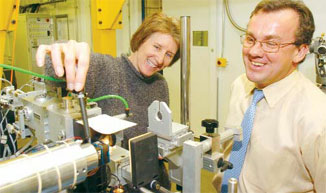 Structural biologists will soon have access to the latest advances in synchrotron technology. At a ceremony dedicating three new beamlines on June 27 at Argonne National Laboratory’s Advanced Photon Source, researchers toured facilities and watched demonstrations of instrumentation and experimental methods that hold promise for breakthroughs in medical research.

In a synchrotron, high-speed electrons run laps through hollow storage rings and, in the process, generate intense X-ray beams. The radiation, which is much brighter than that available from benchtop X-ray sources, is directed toward workstations known as beamlines, where scientists can use the light to probe the structures of molecules and conduct other types of investigations.

The new beamlines, which are sponsored by the National Institutes of Health, were developed primarily for studies by structural biologists, who, according to NIH, make up nearly half of all synchrotron users today. The facilities will provide these scientists with access to the most intense X-ray source in the Western Hemisphere.

A number of studies have already been conducted at one of the new beamlines. In one case, researchers obtained the detailed structure of the bacteria-infecting HK97 virus. Detailed knowledge of the structures of viruses and proteins—and the way they interact with molecules—can aid researchers in designing drugs that block those interactions.

The new facilities were designed to accommodate the latest in robotic and automated tools. They are also the first to take advantage of a new technology that fits two independent beamlines in the space normally used for one.

“The ability to do two experiments simultaneously from the same light source is a big bonus,” remarks Janet L. Smith, a professor of biological chemistry at the University of Michigan and director of the new beamline development team. “It doubles the value of real estate at the synchrotron,” she says.

According to the development team, one of the beamlines will be available for general use later this year. All three beamlines are expected to be fully operational by summer 2007.