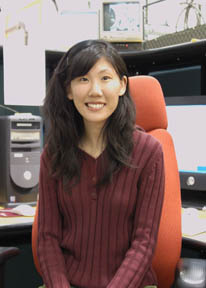 The Advanced Photon Source (APS) Users Organization (APSUO) is pleased to announce that Wendy L. Mao is the recipient of the 2006 "Rosalind Franklin Young Investigator Award." The award recognizes important technical or scientific accomplishment by a young investigator that depended on, or is beneficial to, the APS. Dr. Mao will receive this award on May 3 at the 2006 APS Users Meeting, at which she will also present her work.

Carol Thompson (Northern Illinois University), Chair of the APS Users Organization Steering Committee, said of this year’s award process, “I am immensely pleased with the quality of candidates nominated for the APSUO Rosalind Franklin prize. The judges faced a daunting task in selecting a single winner among the highly competitive applications; and the selection process only increases our appreciation of the amazing breadth of fields that benefit from experiments at the APS. I am thrilled that the award continues to stimulate the competitive nature of groups utilizing the synchrotron. We received highly persuasive packets highlighting and outlining the beautiful work of postdoctorals and graduate students and believe that many of the junior scientists nominated now will be the names we recognize in the future, taking on leadership roles in their respective disciplines. Although the judges must choose one winner, the exceptional quality of candidates makes us confident that the APS will continue to have a high impact in a diversity of fields.”

Mao received her bachelor’s degree from MIT in 1998 and her Ph.D. from the University of Chicago in 2005. She is currently a J. Robert Oppenheimer Postdoctoral Fellow at Los Alamos National Laboratory.

Mao has made contributions to an exceptionally broad range of topics, from the structure of graphite under pressure, to the properties of iron-rich materials at the boundary between the Earth’s core and mantle, to the synthesis and characterization of a new family of hydrogen storage materials based on molecular compounds.

In her work on graphite, Mao looked at a half-century-old problem of the behavior of graphite when it is compressed at room temperature. It turns, not into diamond, but into an unusual and unexpected phase. The structure and bonding of this phase remained stubbornly enigmatic because existing techniques could not probe electronic structure at high pressure. At the APS, Mao applied x-ray Raman scattering (XRS) spectroscopy to map the detailed changes in the carbon K-edge that give a signature of the bonding. For graphite at high pressure, XRS revealed an unusual bonding arrangement that explained the material’s properties. An additional hydrostatic x-ray diffraction study identified its structure. The high photon flux of the APS made the XRS technique feasible in this case. In fact, with this application of XRS, Mao has opened a new field—investigation of the electronic structure of light elements under pressure.

As Mao explains, “A big strength of the APS is that there are so many techniques here that can all be applied to the same sample. Our work on graphite under pressure is a good example of an old problem waiting for the right new technique to come along.”

Mao later exploited the strange properties of this graphite material—its hardness is both pressure-dependent and reversible—for experimental hardware that helped her achieve new results at the APS in a different field: studies of deep-Earth minerals. In that work, she discovered an iron-rich silicate that occurs at deep-mantle conditions. The material properties of this new phase may explain the strange seismic features of the D ² zone—the lower 300 kilometers of the mantle, just outside the Earth’s molten core.

In her current work at Los Alamos, Mao studies the structure of hydrogen clathrates, materials proposed for storing hydrogen for energy applications. Starting from a structure that was stable only at relatively high pressure, she found that with a slight decrease in pressure, the structure transformed into one that then remained stable at ambient pressure and liquid nitrogen temperature. Synchrotron studies helped identify the phase and monitor its stability. This work is also relevant to planetary studies, as such processes might also occur on the gaseous planets.

All of Mao’s science seems to spring from her curiosity about how “ordinary” abundant elements can change their properties so fundamentally at extraordinary conditions. She brings this perspective to all her scientific questions. “Pressure is another dimension for changing material properties. In our daily life we forget that most of the material on Earth is at high pressure. It’s not like what we see on the surface!”

The APS and the APSUO established the "Rosalind Franklin Young Investigator Award." The award is open to senior graduate students and those whose Ph.D. was awarded no more than two years prior to nomination. The award consists of a plaque plus $1,000.

Rosalind Franklin pioneered the use of x-ray diffraction in analyzing complex, unorganized matter such as large biological molecules and not just single crystals. In 1951, Franklin went to work as a research associate for John Randall at King's College. While in her early 30s, Franklin performed x-ray crystallographic studies of DNA that were a critical contribution to the solution of the molecule's structure. J. D. Bernal called her images of DNA "the most beautiful x-ray photographs of any substance ever taken." Franklin's career was cut short by her untimely death at age 37.