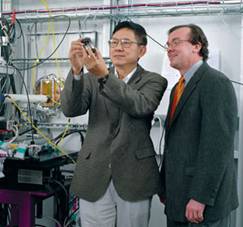 The Royal Swedish Academy of Sciences has awarded David H. Mao of the Geophysical Laboratory the Gregori Aminoff Prize in Crystallography 2005 "for pioneering research of materials at ultrahigh pressures and temperatures." Dr. Mao is the Director of the High Pressure Collaborative Access Team, which manages the beamlines at Advanced Photon Source (APS) sector 16. Named after Gregori Aminoff, the pioneering Swedish crystallographer, the prize is given annually to recognized scientists, or to a group of no more than three persons of international distinction, who have made a major contribution to crystallography.

Murray Gibson, Associate Laboratory Director for the APS, said of Mao, “David has been a pioneer of high-pressure science, and especially of the use of third-generation x-ray sources. We’re delighted to see him win this well-deserved honor.”

The Prize consists of a gold medal, a diploma, and a monetary award. The Prize will be presented in connection with the Academy's Ordinary Session on June 8th, 2005, followed by a 50 minute Award Lecture by Dr. Mao to an audience of Academy Members of different disciplines, other scientists, and students. During the subsequent days, June 9-10, there will be a symposium on a theme in crystallography related to the subject of the award.

Each year, the Royal Swedish Academy of Sciences awards a number of prizes to scientists, and in this way distinguished research achievements are given recognition. The international prizes include: