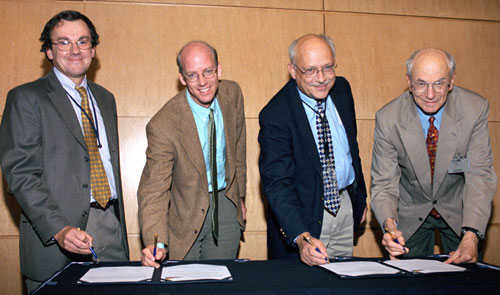 With strokes from four ceremonial pens, the Inelastic X-ray Scattering Collaborative Development Team (IXS-CDT) became the twenty-second research group to sign up for construction of x-ray beamlines at Argonne National Laboratory's Advanced Photon Source (APS). As the diagram below shows, only 5 of a possible 35 pairs of APS x-ray beamlines remain uncommitted.

The September 15, 2003, Memorandum of Understanding signing ceremony formalized the relationship between IXS-CDT and the APS. APS staff will construct the IXS-CDT beamline at sector 30 on the APS experiment hall floor. The IXS sector aims to be the best in the world for inelastic x-ray scattering, a very important application that takes full-advantage of the brilliance from third-generation synchrotrons such as the APS. IXS-CDT will have two specialized spectrometers: HERIX, a high-resolution inelastic x-ray scattering instrument for studies of lattice vibrations, and MERIX, a medium-resolution spectrometer for electronic structure measurements.

Murray Gibson, Argonne Associate Laboratory Director and APS Director, welcomed IXS-CDT to the growing list of APS research groups. "This is one of the most exciting new developments at APS. By partnering with the outside community, APS will participate in building a state-of-the-art capability that will benefit the wider scientific community. We are committed to investing our resources to make this the best possible facility."

Understanding the dynamics of a material's molecular system is crucial from a number of perspectives. For researchers interested in hard-condensed-matter, a given system is completely described by the relaxed electronic state of molecules (called the "ground state") and the excitations from that ground state. From a soft condensed matter perspective, the propagation of sound waves and other density fluctuations determine the response of the system to time-varying probes — a key aspect of the properties of a material.

The CDT represents a new kind of partner-user arrangement at the APS. It is similar to the more traditional collaborative access team during the construction and commissioning phases, but becomes an APS facility beamline during operations, open to competitive access by general and partner users. 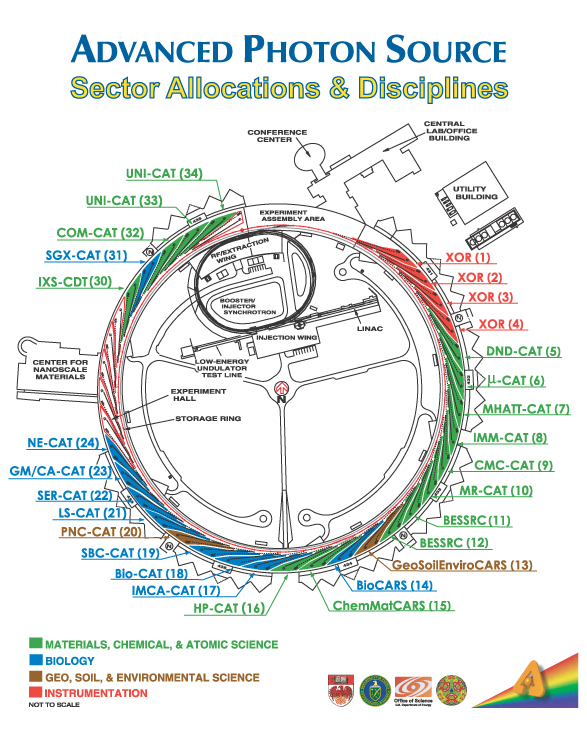