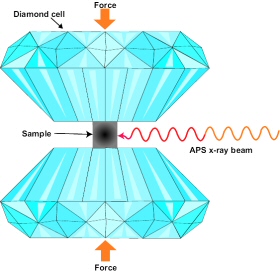 Science has yet to achieve the alchemist’s dream of turning lead into gold. But a group of re-searchers using the GeoSoilEn-viroCARS (GSECARS) and High-Pressure Collaborative Access Team (HP-CAT) facilities at the Department of Energy’s Advanced Photon Source (APS) at Argonne National Laboratory, may have found a way to turn ordinary soft graphite (source of the “lead” found in pencils) into a new, super-hard material that “looks” just like diamond.
Using the high-brilliance x-ray beams from the APS, the group discovered that, under extreme pressure, graphite (among the softest of materials and the source of the lead found in pencils) becomes as hard as diamond, the hardest known material. What’s more, the new super-hard material can be induced to return to its previous soft state.

Graphite is made of layers of loosely bound carbon atoms that are spaced far apart. Because graphite’s carbon atoms in, for instance, pencil lead are not tightly bound to each other, they can be scraped off onto a surface, leaving a mark. Diamond's atoms, which are also carbon, are tightly bound together, yielding extreme hardness. These diamond-type atom bonds are difficult to achieve. Diamond in the Earth is made by great pressures and intense heat over geological time scales. There remain many secrets about how carbon behaves under high pressure, and the studies by Mao and collaborators are shedding light on how diamond bonds form.

The researchers carrying out this new study used a diamond anvil cell and inelastic x-ray scattering at the GSECARS (APS sector 13) and HP-CAT (APS sector 16) beamlines to produce pressure of approximately 17 gigapascals, or 170,000 times the atmospheric pressure experienced at sea level. A pressure of 17 gigapascals would exist more than 300 miles beneath Earth's surface. The inelastic scattering signal is weak, but, thanks to the high brilliance of the APS combined with the novel beamline x-ray focusing optics and a multi-element inelastic x-ray analyzer designed by scientists at GSECARS, the data could be collected in only a few days.

The group’s findings, reported in the October 17 issue of Science and the “Science Concentrates” section of the October 20 issue of Chemical & Engineering News, (80 [42], p.23) show that, when the graphite was compressed at room temperature, it experienced a startling transformation. Half of the weak, widely spaced bonds between the graphite layers were forced closer together, converting them to stronger, diamond-like bonds. In fact, the graphite became so hard that it cracked the diamond anvil. Moreover, the graphite became optically transparent, a super-hard insulator, much like diamond. But, while the known forms of naturally produced diamond retain their hardness, the graphite in this experiment reverted back to its original softness once the pressure was removed.

While experts point out that more studies are needed before this basic science can be carried over into practical applications, a better understanding of atomic bonding structure fundamentals will help materials scientists understand how and why a material becomes super-hard. As this x-ray research technique evolves, it can be used to find answers to long-standing riddles about what transpires at the atomic scale, the key to understanding the behavior of materials.

The group was led by Wendy Mao, who is a graduate-student mineral physicist at the University of Chicago, which operates Argonne for the Department of Energy. Mao’s father, David, the Director of HP-CAT, and a researcher with the Carnegie Institution of Washington, Geophysical Laboratory, was a member of the group.

GSECARS, a national user facility in operation at the APS since 1998, is focused on advancing our knowledge of the composition, structure and properties of Earth materials, the geologic processes they control and the chemical/physical processes that produce them. The sector specializes in research using high-pressure/high-temperature crystallography and spectroscopy with the diamond anvil cell; high-pressure/high-temperature crystallography and imaging with the large-volume press; powder, single crystal and interface diffraction; inelastic x-ray scattering; x-ray absorption fine structure spectroscopy; x-ray fluorescence microprobe analysis; and microtomography.