Changes at the AAI 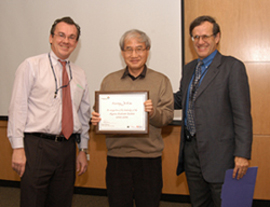 The Argonne Accelerator Institute (AAI) was initiated in 2002 by Kwang-Je Kim of the Argonne Accelerator Systems Division, who has ably guided the AAI from its inception. The AAI, which began as CARA, for Coordination of Accelerator Research at Argonne, is a Lab-wide and now inter-laboratory initiative to enhance Argonne’s core strengths in accelerator science and technology, and to engage major new accelerator projects for Argonne. The initiative, formalized as AAI in March 2006 with Kim as the Director, has been primarily responsible for growing Argonne’s role in the International Linear Collider, which, if sited at Fermilab, would be a major opportunity for Illinois to sustain and expand the state’s role as a primary center for frontier accelerator science.

Kwang-Je Kim is an Argonne Distinguished Fellow with an outstanding scientific career in accelerator physics, with pioneering contributions in the development of synchrotron radiation, free-electron lasers, and high-brightness electron beams. Prior to joining Argonne, Kim was Deputy Head of the Center for Beam Physics at Lawrence Berkeley National Laboratory.

Now, with the AAI entering a mature phase, it has been decided to restructure management of the institute to emphasize the evolving technical emphasis. Kim will serve as the Chief Scientist of the AAI, while Rod Gerig (Deputy Associate Laboratory Director for Scientific User Facilities) has been appointed Director of the AAI. Harry Weerts (ANL-HEP) and Sandra Biedron (ANL-ES) continue as associate directors.

With the Fermilab contract now associated more closely with The University of Chicago, new possibilities are evolving for strengthened collaboration between Fermilab and Argonne. The AAI will play key role in implementing collaboration, and supporting all accelerator initiatives.