Bringing Fruit Flies in from the Cold 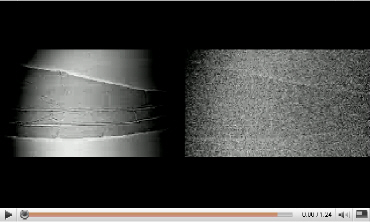 Based on the University of Western Ontario press release

Using a microscope the size of a football field, researchers from The University of Western Ontario, the University of Nevada-Las Vegas, Argonne National Laboratory, and Virginia Polytechnic Institute and State University are studying why some insects can survive freezing, while others cannot.

Why is this important? Because the common fruit fly (Drosophila melanogaster) is one of the bugs that cannot survive freezing and the little creature just so happens to share much of the same genetic makeup as humans, so finding a way to freeze the flies for research purposes is a top priority for geneticists the world over (about 75% of known human disease genes have a recognizable match in the genetic code of fruit flies).

And why the large microscope?

“It’s the only one in the world that’s set up for this kind of imaging on insects,” said lead researcher Brent Sinclair of his team’s use of the U.S. Department of Energy’s Advanced Photon Source (APS), at Argonne National Laboratory. The APS generates high-energy x-rays that allow Sinclair and his collaborators to film the formation and spread of ice in real time as the maggots freeze.

Sinclair said this implies that the main adaptations required to survive freezing are at the cellular or biochemical level, rather than because of fundamental structural differences.

“We’re comparing Chymomyza amoena, an insect native to Ontario that survives freezing, with Drosophila melanogaster, because they’re very close relatives,” he said. “The idea is to find the magic bullet that allows some bugs to survive freezing and some not. That’s the goal here.”

This work was supported by grant number RR022885 from the National Center for Research Resources, a component of the National Institutes of Health; a Natural Sciences and Engineering Research Council of Canada Discovery Grant; and grants from the Canada Foundation for Innovation and the Ontario Research Fund to B.J.S. Use of the Advanced Photon Source was supported by the U.S. Department of Energy, Office of Science, Office of Basic Energy Sciences, under Contract No. DE-AC02-06CH11357.