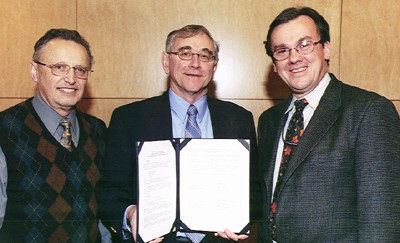 Sharing the wealth of new technology and supporting new synchrotron radiation facilities has been a hallmark of the international synchrotron light-source community. The Advanced Photon Source (APS) at Argonne National Laboratory has, from its inception, been among the leaders in developing innovative x-ray technology and then making that knowledge available, while collaborating with other facilities to evolve the technology even further. For the latest example, one need only look 1000 miles north of Argonne to the Canadian Light Source Inc. (CLSI) on the University of Saskatchewan campus in Saskatoon, Saskatchewan.

At a January 23, 2003, signing ceremony hosted by the APS, Bill Tomlinson, Executive Director of the CLSI; Murray Gibson, Associate Laboratory Director for the APS; and Efim Gluskin, Director of the Argonne Experimental Facilities Division (XFD) signed a Memorandum of Understanding formalizing the on-going working arrangement between the sister facilities.

The CLSI will utilize the designs for insertion devices (IDs), beamline front ends, and beamline instrumentation systems developed by XFD personnel, and the APS will fabricate ID vacuum chambers for the CLSI ring. Canadian Light Source scientists and engineers will collaborate with their APS counterparts in further development of these and other synchrotron x-ray technologies. Personnel from both light sources will visit each others' facility to gain on-site expertise and experience.

"This is a continuation of the long-standing tradition of mutual support and general partnership among synchrotron light sources worldwide," said Gluskin.

The CLSI is to be Canada's national facility for synchrotron light research when operations commence in January of 2004. The stadium-sized, $173.5-million project is wholly owned by the University of Saskatchewan and is the largest scientific research facility constructed in Canada in more than 30 years.

The project began as a collaborative venture between the University of Saskatchewan, the City of Saskatoon, the Province of Saskatchewan and the Government of Canada, "an unprecedented federal-provincial-civic-academic partnership." Ontario became a major partner on March 28, 2000 with a $9.4-million investment through the Ontario Synchrotron Consortium based at the University of Western Ontario. The CLSI project is endorsed by 18 universities. Work is underway on the accelerator facilities and first set of 10 beamlines. Eventually, the facility expects to have more than 30 beamlines in operation.