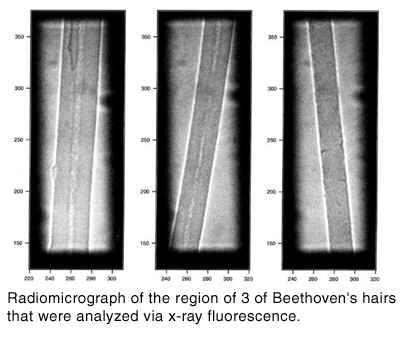 The Advanced Photon Source (APS) has played an important role in a four-year project to solve the mystery of what caused composer Ludwig von Beethoven's years of chronic illness. The probable answer: lead poisoning. This toxin also may have contributed to his death.

A team of researchers expert in chemical analysis found unusually high levels of lead concentration in eight strands of Beethoven's hair, according to the project director, William Walsh, who is also chief scientist of Health Research Institute, Naperville, IL. Walsh, a nationally known expert in hair and chemical analysis, was recruited for the project by Beethoven enthusiasts Ira Brilliant and Che Guevara, who purchased the Beethoven hair in 1994 through Sotheby's in London. The two men selected Walsh to determine if there were any scientific lessons to be learned from the hair.

At a press conference held at the Department of Energy's Advanced Photon Source at Argonne National Laboratory on October 17, 2000, Walsh announced the Beethoven findings.

"Beethoven saw physician after physician in search of a cure for his physical ailments," said Walsh. "He suffered from bad digestion, chronic abdominal pain, irritability and depression. It was such a concern to him that years before his death he wrote a letter to his brothers that said, 'As soon as I am dead, if Dr. Schmidt is still alive, ask him in my name to discover my disease, and attach this written document to his account of my illness so at least as much as possible the world may be reconciled to me after my death.' "

Since he died in 1827 at age 57, there has been much speculation but no proof as to the cause of Beethoven's illnesses and death.

"Independent analyses of Beethoven's hair show that he had plumbism - or lead poisoning - which could explain his life-long illnesses. It would also have had an impact on his personality and could have contributed to his death," said Walsh. Walsh doubts that lead poisoning caused his deafness, but research continues in that area and it is hoped that there will be results to report within the year. 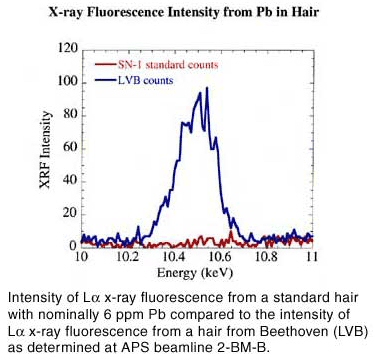 "Everything about this project has been fascinating," said Walsh, who worked with McCrone Research Institute, Chicago, and the APS on the analysis. "You can learn a great deal about a person from hair analysis and the labs at McCrone and Argonne used the most sophisticated technology available in the world today for this project."

In the course of the project, Walsh looked for distinctive trace-metal patterns associated with genius, irritability, glucose disorders and malabsorption and found they were not present in the Beethoven samples. He also looked for the presence of mercury, which would have suggested that Beethoven received medical treatment for syphilis, which was usually treated in that period with mercury compounds, and which some Beethoven scholars suspected he had contracted. No mercury was found.

A DNA analysis also was performed and has defined a significant portion of Beethoven's genetic make-up. This information will be used in future research studying musical genius. Another analysis indicated that Beethoven avoided opiate painkillers during his long and painful death, keeping his mind clear for his music, which he continued working on until the day he died.

That Beethoven's hair survived into the 21st century is, in itself, a fascinating story that began with a young musician, Ferdinand Hiller, clipping it from Beethoven's head the day after he died. It was then passed from generation to generation of Hillers, and wound up in the hands of a Danish physician, Kay Fremming, who was deeply involved in the effort to save Jews in Nazi-occupied Denmark. It is believed Fremming was given the hair in gratitude for his work on behalf of the Jews. After Fremming's death, his daughter assigned it for sale with Sotheby's and it was purchased by the two Americans, who then launched the research project. The journey of the hair is the subject of a book, Beethoven's Hair, which is being released this week by Broadway Books, and was written by Russell Martin.

Press coverage of this story includes: