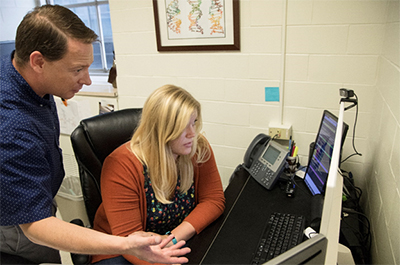 The original West Virginia University article by Tara Scatterday can be read here.

Under conventional magnification, the crystals Aaron Robart grows in his West Virginia University (WVU) lab may look like simple rock salt, but by bombarding them with x-rays, he and his research team can build computational models that reveal the molecules within.

On August 22, Robart, assistant professor of biochemistry in the WVU School of Medicine, used the powerful Advanced Photon Source (APS) at the U.S. Department of Energy’s Argonne National Laboratory in Chicago to zap three types of life-sustaining crystals with x-rays, revealing molecular structures that resemble tangles of corkscrew pasta or patterns of daisies.

And he did it without leaving Morgantown, West Virginia.

Robart jokes that before it was possible to control the APS from a distance, he “practically lived in Chicago” so he could visit the facility in person. Because (x-ray) beam time at the APS is scarce and can fall in the middle of the night, being able to remotely manipulate the x-ray beams is no small convenience. (The APS is an Office of Science user facility.)

By connecting to the experimental facility operated by the Northeastern Collaborative Access Team at the APS, he can control the ultra-bright, high-energy x-ray beams via the Internet to gather data that may drive new treatments for cancers, neurological diseases, stroke, diabetes and other conditions that arise as our cells multiply, age, and accumulate wear and tear.

Robart explains that human chromosomes are capped with telomeres – regions that protect chromosomes from deterioration the way that plastic tips at the ends of shoelaces prevent them from fraying.

Normally telomeres shorten as we get older and our chromosomes replicate over and over again, but in the case of diseases such as cancer, telomeres may replenish themselves, making it possible for cancer cells to avert programmed cell death and be, theoretically, immortal.

The APS is one of the few facilities in the country that can reveal detailed information about these phenomena.

“Instead of smashing particles together, as in a high-energy-physics collider, the Advanced Photon Source makes electrons travel in a large, closed loop that can fit about one and a half football fields inside the circumference,” Robart says. “This produces very strong and incredibly stable x-rays that we use to obtain atomic-level detail of how molecular machines perform the chemical reactions of life.”

Michael Schaller, chair of the WVU department of biochemistry, says that merely observing a crystal under a microscope would not reveal such complexity.

One of the crystals Robart x-rayed with the APS is an enzyme crucial to liver metabolism. Another is a molecular complex that promotes the healthy breakdown of proteins. The third crystal comprises components of the “spliceosome,” a combination of RNA and protein that guides how pieces of RNA are cut apart and pasted together.

“You can’t fix a machine until you know how it works,” Robart says.

With innovations like the virtual manipulation of the APS, biochemists at WVU can look far afield for insights into molecular machines while staying close to home.