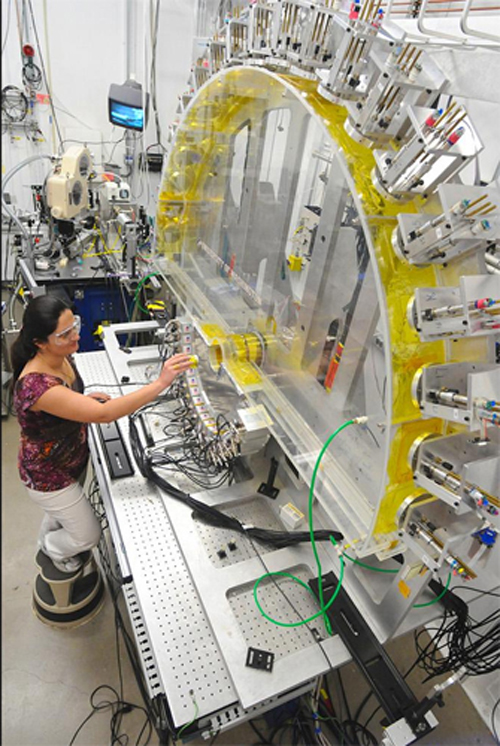 The original WTTW online news story by Paul Caine can be read here,

Since 1995, researchers in Chicago and from around the world have used Argonne National Laboratory’s Advanced Photon Source, or APS, to create super bright X-rays to probe everything from dinosaur bones to atomic particles.

But the APS has an even brighter future.

A planned $815 million upgrade will be a “scientific game-changer,” said Robert Hettel, director of the APS upgrade project. “We’ll be able to look deep inside real samples, such as biological organisms, and observe atoms moving in real time.”

The APS, described as “one of the most technologically complex machines in the world,” essentially functions as a giant X-ray microscope, allowing researchers to see the structure of matter at a molecular and atomic level. That view has enabled advances across a range of industries and helped to improve everything from drugs to engines to batteries.

The X-rays are produced by accelerating electrons to rates that near the speed of light in a circular storage ring about two-thirds of a mile in length. They’re controlled and steered around the ring by powerful magnets.

After the upgrade, Streiffer says the APS will be able to do things that are all but impossible now, like mapping all of the neuron connections in a mouse brain. To do that you have to be able to image things down to a scale of five nanometers – five billionths of a meter. While that is possible today, it would take a very long time.

“To do a whole mouse brain with the current APS would take us well over a hundred years,” said Streiffer. But with the upgraded APS they could map all the connections in a mouse brain “in a few weeks.”

Each year more than 5,700 researchers from across the globe conduct experiments using the APS. Because demand for the APS far outstrips its availability, panels of scientists review the proposals and determine which experiments have the greatest scientific value.

“So it really is a process that is designed to select the best science that can be done and then those proposals get the time to execute the science,” said Streiffer.

One research project that got the green light helped analyze drug compounds that would be effective against the deadly Ebola virus. Last week, early study results from two Ebola treatments showed promising results. One was developed in part using the APS at Argonne.

Work being done at the APS is also helping to usher in a greener energy future. Being able to see and understand the structure of things at a molecular level has enabled the development of far better batteries – crucial for electric cars and for storing energy from renewable sources.

“By using X-ray scattering, X-ray diffraction to measure the structure of the cathodes that go into lithium batteries, Argonne researchers were able to develop and patent much more efficient battery materials that ultimately are in the batteries that are in the Chevy Bolt,” Streiffer said.

“There have been a couple of accidents in recent years where turbine blades have failed in operating aircraft and in some cases have led to engine failure and in one case led very unfortunately to a fatality,” Streiffer said.

“Once the APS upgrade is complete, we will be able to take a turbine blade exactly as you use in an airplane engine and put it at the temperature and mechanical conditions representative of an operating engine. We can then observe the turbine blade in action and catch the first initiation of a crack to better understand the physics of how a crack originates,” he said.

That, in turn, will lead to the development of better turbine materials and safer aircraft.

Ultimately, the APS upgrade will allow researchers to fully understand materials and biological and chemical processes right down to the movement of individual atoms.

“If we did not upgrade the APS we would not only lose all the great science that we could do but we would be falling behind the rest of the world,” Streiffer said. But the upgrade “will ensure that the United States remains at the forefront of hard X-ray sciences for decades to come.”

The main construction work on the upgrade will begin in 2022 and take approximately a year.