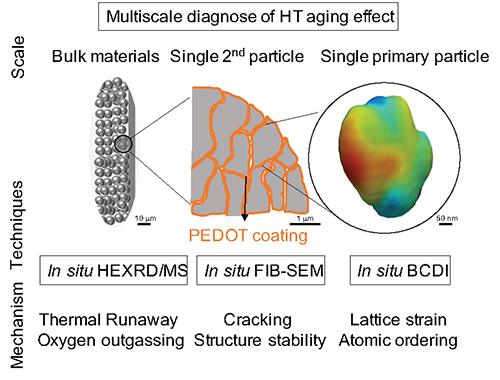 The exponential growth in the use of lithium-ion batteries (LIBs) for electric vehicle and stationary power applications is challenging researchers to design LIBs that are better able to operate stably across regional and seasonable temperature fluctuations, particularly at high temperatures. Current high-capacity layered oxide cathodes such as LiNi0.8Co0.1Mn0.1O2 (NCM811) are susceptible to deleterious changes while charging and discharging at elevated temperatures. Calendar aging is another issue made worse by elevated temperatures, as LIBs in electric vehicles typically see intermittent use, having long idle hours under high states of charge. The susceptibility of LIBs to thermal runaway remains a serious safety concern, as well. An international team of researchers used the U.S. Department of Energy’s (DOE’s) Advanced Photon Source (APS) to test coating-layered NCM811 cathodes with ultra-conformal poly (3, 4-ethylenedioxythiophene) (PEDOT) as a way of suppressing performance degradations during high-temperature (HT) LIB operation. Their results, published in the journal Advanced Materials, suggest that the PEDOT coating can significantly improve the thermal stability of layered NCM811 cathodes at the bulk level, which can thus increase safety performance and high-temperature operational resiliency.

Through a series of advanced characterization techniques including in/ex situ Bragg coherent diffractive imaging (BCDI), in situ focused-ion-beam scanning electron microscopy (FIB-SEM) and transmission electron microscopy (TEM), and in situ high-energy x-ray diffraction coupled with mass spectrometry (HEXRD-MS), they systematically investigated the structural transformations NCM811 cathodes undergo with and without PEDOT coatings during cycling aging, calendar aging, and thermal runaway (Fig. 1). They then sought the reasons for the differences they saw at the atomic scale and at the primary particle, secondary particle, and bulk powder levels. The BCDI experiment was conducted at the X-ray Science Division (XSD) Microscopy Group’s 34-ID-C x-ray beamline of the APS, while the HEXRD-MS experiment took place at the XSD Structural Science Group’s 17-BM beamline also at the APS, a DOE Office of Science user facility at Argonne National Laboratory.

The cycle aging tests found that the coated NCM811 cathode showed higher capacity retention than the bare cathode after 100 cycles at 55° C and maintained a much higher average discharge voltage, indicating that structural transformations had been reduced. When the cut-off voltage was increased to 4.5 V, the coated cathode had a much higher capacity (197.3 mAh/g) than the bare cathode (159.3 mAh/g) after charge/discharge at C/3 and 55° C for 50 cycles, leading to a higher capacity retention of 86.3% than the bare NCM811 cathode (74.2%). In general, abusive calendar aging resulted in compromised electrochemical performance for both cathodes. Nevertheless, the PEDOT coating was able to mitigate this problem, with a reversible capacity of 159.8 mAh/g and capacity retention of 72.5%, in comparison with only 121.4 mAh/g and 56.3%, respectively, for the bare NCM811 cathode. When heated to 500° C in the thermal runaway test, the layered NCM811 cathode with the PEDOT coating showed significantly improved thermal stability, which could improve the safety performance and high-temperature operational resiliency of a LIB having such a cathode.

In seeking the origins of the electrochemical performance difference between the bare and coated cathodes during abusive calendar aging, the researchers found that electrolyte had penetrated the surface of the bare NCM811 cathode to a depth of ~15 nm, leading to transition metal dissolution and severe surface reconstruction. In contrast, the 10-nm-thick PEDOT coating prevented direct contact between the electrolyte and the coated NCM811 cathode during high state-of-charge and HT calendar aging, thereby stabilizing the cathode-electrolyte interface.

The in situ BCDI and FIB-SEM tests of single primary and secondary particle behavior collectively revealed that the PEDOT coating can alleviate the mechanical stress inside and between the primary particles after HT and high state-of-charge aging, again showing the PEDOT coating’s ability to provide a well-maintained crystallographic structure and hence better battery performance. Upon heating the 4.5-V-charged NCM811 cathodes from room temperature to 500° C, the researchers found that both cathodes underwent structural transformations and oxygen outgassing, but that the PEDOT coating postponed the conversion to the rock salt phase to a higher temperature and reduced oxygen outgassing by 50%. ― Vic Comello

Research at Argonne National Laboratory was funded by the U.S. Department of Energy (DOE) Vehicle Technologies Office. The Advanced Photon Source and Center for Nanoscale Materials are DOE Office of Science User Facilities operated for the DOE Office of Science by Argonne National Laboratory; research there was supported by the DOE under Contract No. DE-AC02-06CH11357. X.L., G.X., and K.A. acknowledge the support of the U.S. China Clean Energy Research Center (CERC-CVC2). Q.L. and G.C. acknowledge funding support from the Hong Kong Research Grants Council (GRF 15221719), Otto Poon Charitable Foundation (No. 847W), and The Hong Kong Polytechnic University (P0034050).