What Drives the Charge Density Wave Transition in 2-D Metals? 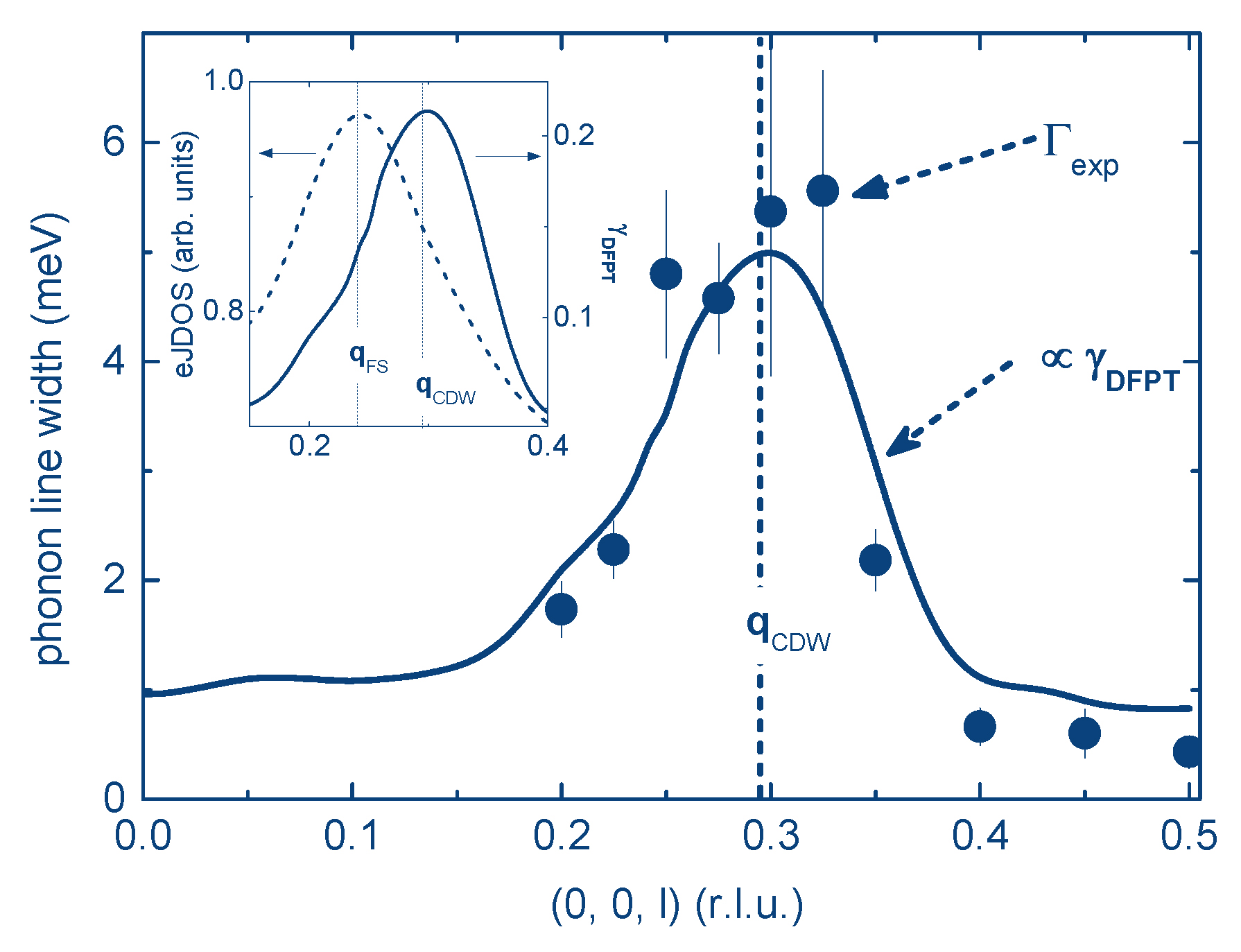 Although the electron densities of most metals are highly uniform, those of two-dimensional metals, such as the rare-earth tritelluride TbTe3, may spontaneously develop a wave-like periodic variation accompanied by a lattice distortion of the same periodicity when the temperature drops below a critical transition temperature (TCDW). This variation in the electron density, which is called a charge-density wave (CDW), is receiving intense study because it often competes with more exotic ground states in many materials, and is therefore important to fully characterize. Once thought to be driven primarily by electron-electron interactions, CDW ordering is increasingly being seen as driven primarily by an electron-phonon coupling (EPC). A team of researchers contributed to this new understanding by studying CDW ordering in TbTe3 at the X-ray Science Division 30-ID-B,C HERIX beamline of the U.S. Department of Energy’s Advanced Photon Source at Argonne using high-resolution inelastic x-ray scattering. They found clear evidence that strongly momentum-dependent electron-phonon coupling defines the periodicity of the CDW superstructure. The researchers then performed detailed lattice dynamical calculations to more thoroughly understand the significance of their experimental results.

The concept of a CDW dates back to the work of Rudolf Peierls in the 1930s, when he demonstrated that a one-dimensional metallic chain of atoms is unstable with respect to a phase transition in the presence of an EPC. This led to CDWs being seen as electronic instabilities of the Fermi surface (FS) that occur in the presence of an electron-phonon coupling, in which many electrons are excited by the same ordering wave vector, qFS. This was conceptualized as happening because the Fermi surface contains parallel parts that could be “nested” by qFS, leading to a divergence in the electronic susceptibility, which is conveyed to the lattice by the EPC, causing a phonon at qFS to soften to zero frequency at TCDW, where it corresponds to a static lattice distortion as the system enters the CDW state.

Early experimental studies of TbTe3 and other rare-earth tritellurides seemed to support the assumption that they exhibited purely electronic CDW ordering. Although theoretical investigations did reveal nesting features in that the calculated real and imaginary parts of the electronic susceptibility showed broad enhancements, indicating electron excitation by a wave vector, the predicted wave vector qFS was different from the observed ordering wave vector qCDW. Moreover, the modest enhancements in the electronic susceptibilities suggested relatively few electrons were involved, raising doubt about whether nesting was sufficient to drive the CDW instability.

The researchers in this study, from the Karlsruhe Institute of Technology, Stanford University, SLAC National Accelerator Laboratory, and Argonne investigated these discrepancies by measuring the energies and linewidths of phonon excitations in TbTe3 as a function of temperature. They used high-resolution inelastic x-ray scattering because it allowed them to obtain measurements of the entire dispersion of the soft-mode phonons over a wide range of temperatures in a sample too small (1*1*0.1 mm³) for standard inelastic neutron scattering.

The researchers then performed ab initio calculations of the lattice dynamical properties of TbTe3 based on density-functional perturbation theory (DFPT) using the high-temperature orthorhombic structure present at temperatures above TCDW. The calculations allowed the researchers to extract the electronic joint density of states (eJDOS), which is directly related to the imaginary part of the electronic susceptibility and reflects the number of electronic states at the Fermi surface connected by a particular wave vector (i.e., the tendency toward Fermi surface nesting).

The experiment revealed strong phonon softening and increased phonon linewidths over a large area adjacent to the CDW ordering vector qCDW at TCDW = 330 K (see the figure). Furthermore, qCDW was clearly offset from the wave vector of (weak) Fermi surface nesting qFS (figure inset). The detailed theoretical analysis indicated that a strongly momentum-dependent electron-phonon coupling was responsible for this shift.