Probing the Phase Dynamics of a Complex Oxide 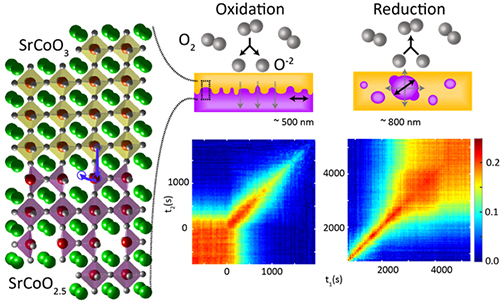 Scientists have shown how oxygen ions interact with a complex oxide, strontium cobalt oxide, causing it to switch from a metal to an insulator and back again. The researchers say that the techniques they used could be utilized for novel studies of other complex oxides, which have applications in many current and future technologies. The results, based on research at the U.S. Department of Energy’s Advanced Photon Source (APS), are published in Physical Review Letters.

Materials in which you can manipulate the proportion of oxide ions are considered good candidates for the development of devices that employ ionotronics (powerful tools and methods for narrowing the gap between conventional electronics and biological systems). Such ionotronic devices, which use ion migration rather than electron transfer to transport charge, could exhibit reversible metal-to-insulator transitions. This is a switch from a metal state with good electrical conductivity to an insulator, a material that supresses electrical conductivity. Materials that can transition between these two states are considered useful for a range of new electronic devices. In suitable ionotronic devices, the reversible metal-to-insulator transition could be triggered by the uptake or loss of oxygen.

In the brownmillerite phase, strontium cobalt oxide is insulating and antiferromagnetic, while the perovskite phase is metallic and ferromagnetic. When switching between these states, the oxide reorders itself and changes its crystal structure as it takes up or loses oxygen.

One use for this switch could be to write memories, with the conducting state as a 1 and the insulating state as a 0, for instance. As well as the metal-insulator transition, there could also be interest in the ferromagnetic-to-antiferromagnetic switch. While origin of this transition was recently explained by theorists at ORNL [1], to take advantage of the transition it is helpful to understand its dynamics, i.e., how quickly oxygen moves in and out of the different phases.

Previous research has shown that the crystal lattices of the two phases are similar. The overall crystal shape is maintained during transition, with changes in the relative amounts of brownmillerite and perovskite states as the transition progresses through the material.

The team found that during oxidation―the switch from brownmillerite to perovskite―oxygen molecules broke down into ions and filled vacancies at the top of the brownmillerite structure. They then diffused into the film and the perovskite phase spread down through the material. But due to the nature of the oxygen dynamics, there were significant fluctuations at the boundary between the two phases―the change in phase did not spread evenly as it moved down through the material.

When nitrogen was introduced, oxygen vacancies formed in the perovskite phase, creating nuclei of brownmillerite. These then expanded in a three-dimensional manner driving excess oxygen out of the material. This expansion was much smoother, with little fluctuation at the phase boundaries, and over time the nuclei joined up.

The research also took advantage of coherence in the x-rays — properties that will improve greatly with the impending upgrade at the APS. New techniques exploiting coherence such as XPCS enabled the researchers to observe the fluctuation of the phase boundaries driven by movement of the atoms from one phase to another, providing detail on how fast the oxygen vacancies filled and emptied during the transitions.

The researchers say that this new ability to see what is happening with the atoms in materials will enable novel studies of other complex oxides, such as those used in lithium batteries and fuel cells. ― Michael Allen

The Center for Nanophase Materials Sciences is one of the five DOE Nanoscale Science Research Centers, premier national user facilities for interdisciplinary research at the nanoscale supported by the DOE Office of Science. Together the NSRCs comprise a suite of complementary facilities that provide researchers with state-of-the-art capabilities to fabricate, process, characterize and model nanoscale materials, and constitute the largest infrastructure investment of the National Nanotechnology Initiative. The NSRCs are located at DOE’s Argonne, Brookhaven, Lawrence Berkeley, Oak Ridge, Sandia and Los Alamos National Laboratories. For more information about the DOE NSRCs, please visit http://science.energy.gov/bes/suf/user-facilities/nanoscale-science-research-centers/.