How to Target “Undruggable” Molecules Involved in Cancer 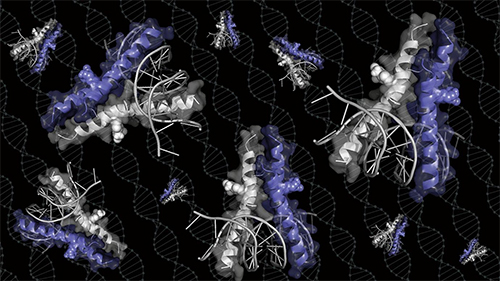 The original University of Chicago “uchicago news” article by Louise Lerner can be read here.

For decades, cancer researchers have longed for a way to target a set of proteins called transcription factors. While we’ve long known that tumors use these proteins to grow out of control, their unique configurations meant that for more than 30 years they had earned a reputation as “undruggable.” A group of University of Chicago scientists announced they have created an innovative way to build synthetic molecules that can target these previously “undruggable” transcription factors. The breakthrough result, which used data collected at the U.S. Department of Energy’s (DOE’s)_Advanced Photon Source (APS) and was published in the journal Nature Biotechnology, holds promise for drugs and treatments as well as tools to better understand cancer biology.

“Doctors have had a hit list of transcription factors for decades, but we have lacked a way to target them,” said UChicago chemist Raymond Moellering, the senior author on the study. “This work sets the stage for letting us go directly for any transcription factor.”

As scientists have detangled the complicated workings of the cell, one thing that has become clear over the years is the importance of a class of proteins called transcription factors.

These proteins act like the pilots of the cell’s DNA, deciding which parts of the genome to turn on and off and when. This is an enormous power, which means they are a prime target for cancerous malfunctions. For example, the role of one well-known transcription factor called Myc is to turn cell growth on and off. If a tumor manages to hijack Myc, it’s like taping a brick to the gas pedal. The cells grow out of control.

“If you ask clinicians what they want in order to treat cancer, it’s a way to inhibit Myc,” said Moellering, an associate professor of chemistry whose area of expertise is developing new chemical tools and technologies to study proteins.

Moellering’s lab took a new approach. They built a synthetic molecule that borrowed part of Myc’s configuration—the claws that latch onto DNA. “Right away when we ran the gels, we could see that we had cracked the code for the right configuration,” said Moellering. They then determined the structure of the molecule using diffraction data collected at the Structural Biology Center’s 19-BM x-ray beamline of the APS, a DOE Office of Science user facility at Argonne National Laboratory, in order to study the molecule’s binding properties (Fig. 1).

The synthetic molecules bind very tightly to Myc’s landing point, preventing Myc from latching on. In petri dish tests, the molecules have successfully blocked the growth of cancer cells that are known to rely on Myc. These molecules are also compact enough to slip in and out of the cell, and stable enough to stick around for days before being broken down by the cell.

There is a long way before any molecule would be approved for use on humans, but they are seeing encouraging results in animal trials, the scientists said.

The synthetic molecules could also be used to help researchers better understand the mechanisms of cancer and other diseases—many of which remain mysterious. “There are many different directions where you could imagine using platforms like this,” said Moellering.

The scientists are working with the Polsky Center for Entrepreneurship and Innovation at The University of Chicago to help commercialize the discovery.

The Structural Biology Center is funded by the U.S. Department of Energy Office of Science, Office of Biological and Environmental Research under contract DE-AC02-06CH11357. The authors are grateful for financial support of this work from the following: the Virginia and D. K. Ludwig Fund for Cancer Research (to S.W.F. and G.L.G.); National Institutes of Health (NIH) grant T32 CA009594-34 (to R.E.M. and C.L.) and Medical Scientist Training Program grant T32GM007281 to J.S.C.; the V Foundation for Cancer Research (to R.E.M.); NIH grant DP2GM128199-01 (to R.E.M.); and American Cancer Society-North Central Research Scholar grant RSG-17-150-01-CDD (to R.E.M.).  This research used resources of the Advanced Photon Source, a U.S. Department of Energy (DOE) Office of Science user facility operated for the DOE Office of Science by Argonne National Laboratory under Contract No. DE-AC02-06CH11357.