Looking into the Heart of an Antibiotic Killer 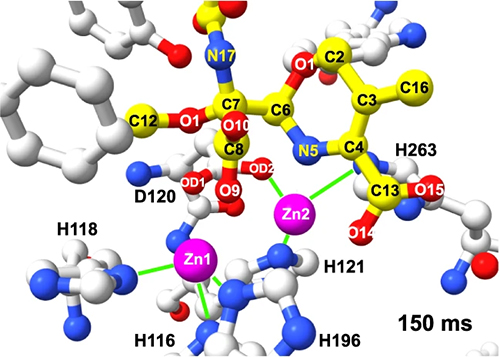 β-lactam-based antibiotics currently account for about 65% of all applied antibiotics, due to their broad-spectrum of activity and favorable safety profile, making this class of drugs the most common clinical approach for treating bacterial infections. Examples of these drugs, which contain a β-lactam ring in their structure, include naturally occurring penicillins, and synthetic cephalosporins, monobactams, and carbapenems. Antibiotics with a β-lactam core target bacterial transpeptidases—enzymes necessary for cell-wall synthesis—and they block the formation of cross-bridges between adjacent peptidoglycan chains, leading to bacterial death. Overuse of β-lactam antibiotics has led to an increase in microorganisms with multidrug resistance. In β-lactam antibiotics, this resistance is driven primarily by bacterial enzymes called b-lactamases. Researchers have now revealed the crystal structure, binding, and cleavage of moxalactam antibiotic bound to L1 metallo-β-lactamase (MBL) from the emerging pathogen Stenotrophomonas maltophilia using the U.S. Department of Energy’s Advanced Photon Source (APS). Drug discovery based on the details captured in this study could contribute key information to counteract antimicrobial resistance and provide tools in future pandemics. The results were published in the journal Nature Communications.

The global use of β-lactam antibiotics has resulted in many microorganisms developing drug resistance, which represents a major threat to human health and wellbeing. New treatments for multidrug-resistant and extensively drug-resistant pathogens are urgently needed. Resistance is driven primarily by the breakdown of β-lactam antibiotic structures by enzymes produced within bacteria called b-lactamases. These enzymes, which come in four classes (A, B, C, and D), are found even in bacteria that have not been exposed to synthetic antibiotics.

The most important of these resistance enzymes, called metallo-β-lactamases (MBL), belong to class B. MBLs have a large, open binding site consisting of multiple flexible loops and a di-nuclear Zn2+ scaffold that anchors the β-lactam ring in place. MBLs from B1 and B3 subclasses can break down the structure of nearly every β-lactam containing antibiotic, including the most recently developed last-resort antibiotics called carbapenems. So far, no new treatments focused on targeting MBL have been developed.

One of the most recently scrutinized MBLs is L1 from Stenotrophomonas maltophilia, belonging to the B3 subclass. S. maltophilia is an opportunistic Gram-negative bacillus multidrug-resistant pathogen that causes infections, mainly among severely immunocompromised and debilitated hospitalized patients.

These researchers obtained serial crystallography data using the Structural Biology Center (SBC-XSD) 19-ID beamline at the APS, a Department of Energy Office of Science user facility aty Argonne National Laboratory. In addition, they employed the BioCARS 14-ID-B beamline at the APS to perform time-resolved serial synchrotron crystallography of the crystal structure, binding, and cleavage of moxalactam, a broad-spectrum, third-generation cephalosporin antibiotic bound to L1 (Fig. 1). The researchers instigated the moxalactam cleavage reaction using a 347-nm UV laser pulse to release Zn2+ ions from a UV-labile zinc-photocage in the presence of substrate. The researchers then captured 2.20-Å-resolution or better structures of L1 MBL at the following ten time points: 20, 40, 60, 80, 100, 150, 300, 500, 2,000, and 4,000 ms. These experiments and high-resolution structures revealed Zn2+ ions and substrate binding, β-lactam ring cleavage, and ligand conformational adjustments in the active site.

The researchers found that L1 adopts a typical MBL fold with two β sheets decorated with exposed α-helices and loops and that its metal scaffold is essential for recognition of the β-lactam ring. The time-lapse structures show that interaction of other moieties of the ligand with protein are secondary and explain enzyme specificity for β-lactams and their ligand promiscuity.

Interestingly, upon substrate binding the chemical transformation does not occur instantly, but instead requires ligand conformation adjustments in the active site, making the enzyme ready to attract and activate the water molecule to hydroxyl that can rapidly attack the C-8 atom. The metal scaffold, C-4, D120 carboxylate, water molecule, and nearby amino acid sidechains provide the environment to shuffle proton needed to complete the chemical transformation.

During this transformation, the distances between atoms of substrate and protein, including zinc ions change significantly, with the opening of the β-lactam ring of moxalactam occurring between C-8 and N-5 atoms. Computational modeling of the cleavage reaction shows that β-lactam ring hydrolysis was completed within 2,000 ms.

These experimental observations can aid the development of more effective inhibitors against emerging pathogens with MBL-based antibiotic resistance. In addition, the method of using time-resolved serial synchrotron crystallography with reaction triggered by photolysis of the UV-labile zinc-photocage could be applied to investigate other metalloproteins and can become a common technique for studying the dynamics of other metal-dependent enzymatic systems.  ― Chris Palmer