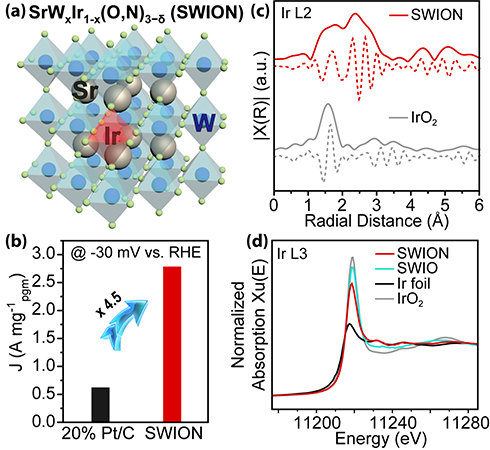 Innovative energy storage and conversion devices such as fuel cells and electrolyzers are sorely needed to help meet the global energy crisis. However, cost-effective, stable, and highly efficient catalysts to activate these systems have proved difficult to develop. Oxynitride perovskites have long been recognized as extremely promising candidates because they combine the versability of perovskite oxides with the added tunability of nitrides. But until a research group recently showed how electrocatalysts could be synthesized from such materials, this avenue to electrocatalyst design and fabrication remained unexplored. These researchers synthesized the first noble metal-containing perovskite oxynitride electrocatalyst using a novel approach that avoided the pitfalls of standard methods and characterized it using a variety of research tools including the U.S. Department of Energy’s Advanced Photon Source (APS). The iridium-incorporated strontium tungsten oxynitride perovskite electrocatalyst showed exceptional activity toward the hydrogen evolution reaction, which is important in green hydrogen production using water electrolyzers. The accomplishment, which was detailed in the Journal of the American Chemical Society, opens a new area of research based on the pursuit of high-performance electrocatalysts made from perovskite oxynitrides.

Usually, perovskite oxynitrides, having the generic formula AB(O,N)3, are obtained through an ammonolysis reaction at high temperatures, which requires the “B” site transition metal in the precursor oxide to have a stable valence state for electrocatalyst applications. This is readily achievable with the low valence states of “early” transition metals (Groups IVB to VIB in the Periodic Table) but not with catalytically active “late” transition metals (Group VIIIB) such as ruthenium, iridium, palladium, and platinum. Incorporating these noble metals into perovskite oxynitrides is very challenging due to their instability toward maintaining high valence states under reductive ammonolysis environments (a chemical reaction similar to hydrolysis in which ammonia reacts with another compound usually to form an amine). The researchers circumvented this problem by doping a precursor oxide with iridium (Ir) at a small number of the “B” sites occupied by an “early” transition metal (tungsten) and then subjecting the doped precursor oxide to an ammonolysis reaction to convert it into a thermodynamically stable oxynitride perovskite. More specifically, the researchers formed Ir-incorporated SrWO4 nanoparticles by a solvothermal process and then subjected the resultant scheelite particles to an ammonolysis treatment to convert them to nanoparticles of the perovskite oxynitride electrocatalyst SrWxIr1−x(O,N)3−δ (SWION), see Fig. 1(a). The electrocatalyst exhibited an ultralow overpotential of only 8 mV to reach a current density of 10 mA per geometric area (cm−2geo) and a 4.5 times greater mass activity than commercial platinum-over-carbon catalysts, see Fig. 1(b).

The researchers used a variety of characterization techniques to confirm the successful incorporation of iridium into the perovskite oxynitride lattices of the nanoparticles. X-ray diffraction (XRD) patterns showed that the phase transformation from scheelite to perovskite nanoparticles took place during the ammonolysis process. Selected-area electron diffraction (SAED) patterns proved the polycrystalline nature of the predominantly perovskite structures. The surface structures of the perovskite oxynitride particles as examined by x-ray photoelectron spectroscopy (XPS) revealed the presence of Ir and its chemical states.

X-ray absorption spectroscopy (XAS) studies were carried out to obtain detailed structural information. Extended x-ray absorption fine structure (EXAFS) Ir L2 edge and Ir and W L3 edge data were collected at the DuPont-Northwestern-Dow Collaborative Access Team (DND-CAT) 5-BM-D beamline of the APS (the APS is a Department of Energy Office of Science user facility at Argonne National Laboratory). X-ray absorption near edge spectroscopy (XANES) analysis of the Ir and W L3 edges showed that the oxidation states of both were slightly reduced but still higher than in the metallic state, with a ⁓4+ oxidation state for the Ir sites, see Fig. 1(d). Anion coordination around W and Ir at the “B” sites was further examined via EXAFS path fitting, with the EXAFS Ir L2 edge data revealing the local structure of the Ir species, see Fig. 1(c).

Overall, the characterization of SWION showed that iridium-incorporated strontium tungsten perovskite oxynitride lattices had been formed with a small fraction of tungsten atoms being replaced by iridium atoms and oxygen/nitrogen vacancies being present. On the atomic scale, the iridium atoms were positioned in highly distorted octahedral unit cells with more anion vacancies occurring around iridium than tungsten. These anion vacancies were primarily nitrogen vacancy defects due to the poor affinity between iridium and nitrogen. The iridium atoms did form bonds with nearby oxygen and nitrogen atoms but may also bond directly to tungsten or Ir atoms in neighboring unit cells across oxygen/nitrogen vacancy locations.

The unique coordination of Ir within the lattices resulted in a higher activity than would be found in a comparable oxide, illustrating the great potential of developing electrocatalysts from perovskite oxynitride materials. Moreover, the success in preparing such a material provides a promising route for designing and developing perovskite oxynitrides in the future and lays a solid foundation for discovering the properties of these hitherto neglected heteroanionic materials.   ― Vic Comello

The U.S. Department of Energy’s APS at Argonne National Laboratory is one of the world’s most productive X-ray light source facilities. Each year, the APS provides high-brightness X-ray beams to a diverse community of more than 5,000 researchers in materials science, chemistry, condensed matter physics, the life and environmental sciences, and applied research. Researchers using the APS produce over 2,000 publications each year detailing impactful discoveries and solve more vital biological protein structures than users of any other X-ray light source research facility. APS X-rays are ideally suited for explorations of materials and biological structures; elemental distribution; chemical, magnetic, and electronic states; and a wide range of technologically important engineering systems from batteries to fuel injector sprays, all of which are the foundations of our nation’s economic, technological, and physical well-being.

Argonne National Laboratory seeks solutions to pressing national problems in science and technology. The nation’s first national laboratory, Argonne conducts leading-edge basic and applied scientific research in virtually every scientific discipline. Argonne researchers work closely with researchers from hundreds of companies, universities, and federal, state and municipal agencies to help them solve their specific problems, advance America’s scientific leadership and prepare the nation for a better future. With employees from more than 60 nations, Argonne is managed by UChicago Argonne, LLC, for the U.S. Department of Energy’s Office of Science.

The U.S. Department of Energy’s Office of Science is the single largest supporter of basic research in the physical sciences in the United States and is working to address some of the most pressing challenges of our time. For more information, visit the Office of Science website.