Going with the Flow: Studying Microjets from Liquid and Solid Tin 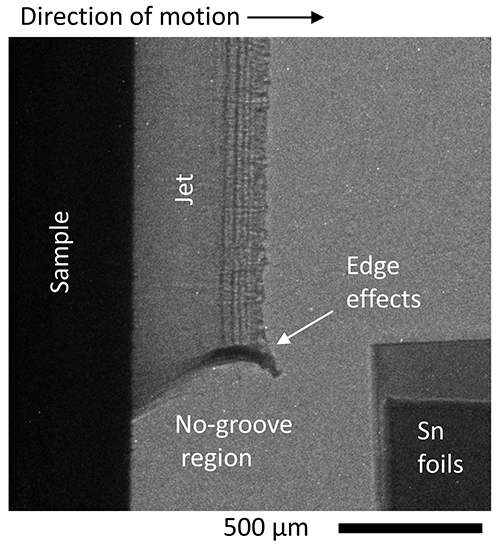 When a material receives a strong impact, the resulting shock wave propagates until it reaches a free surface. There, expelled microjets of the material can launch from defect sites. The characteristics of these microjets depend on a number of factors, including the initial surface profile of the impacted material, the strength and profile of the shock, the materials’ density, and its resistance to shear and cavitation. But how crossing the material’s melt boundary might affect them is less clear. Theoretical and experimental studies have suggested a sudden increase in the mass of ejected material as the base material is driven above the melt boundary, which makes intuitive sense given the shift from strong solid to easily deformed liquid; however, recent computational studies suggest that melting plays a more nuanced role. To examine this question, a team of researchers from Lawrence Livermore National Laboratory used the U.S. Department of Energy’s Advanced Photon Source (APS) to examine microjets in tin (Sn) above and below impacts that result in melting, showing some trends for microjets from solid and liquid base materials that vary significantly with the surface defect size. These findings, published in the Journal of Applied Physics, add some insight about differences between solid and liquid microjets, findings that could be directly applicable to fields like planetary impact and indirectly to other shock-related work such as in industry, where these phenomena could disrupt measurements, damage equipment, or even present safety hazards.

The researchers compared the behavior of Sn with that of copper (Cu), which melts at a significantly higher impact pressure. In polished samples of both of these metals, they cut V-shaped grooves to serve as surface defects. They then subjected these samples to strikes at different impact velocities, measuring the microjets’ morphology, velocity, and mass of ejected materials with high-speed synchrotron phase contrast imaging (PCI) carried out at the Dynamic Compression Sector (35-ID) at the APS.

When shock-compressed to ~23 GPa, Sn melts upon release. Impact velocities were chosen to achieve two pressures below this value (Sn1 and Sn2) and two above it (Sn3 and Sn4). The Cu samples received impacts that produced pressures between the two highest values of Sn (Cu1) and slightly above them (Cu2). Because the Cu melt line is significantly higher than that of Sn, the researchers were able to compare the resulting Cu solid microjets at pressures similar or higher than the Sn liquid ones.

PCI results for Sn1, Sn2, and Cu1 showed the solid microjets forming wavy bands that break up into a net-like field. In contrast, the melted microjets of Sn3 and Sn4 showed a different pattern, with striations perpendicular to the leading edge of the jet with no evidence of breakup. The solid Sn2 microjet showed neither striations nor breakup, instead appearing as a nearly smooth sheet with each observation (Fig. 1).

The researchers note that while it’s tempting to credit melting for the lack of breakup in Sn3 and Sn4, solid Cu2 microjets also show the same prolonged intact elongation, suggesting that this effect may be due to increasing jet velocity causing an increase in stable elongation independent of material property changes.

Both molten Sn3 and Sn4 microjets showed longitudinal striations along the direction of shock propagation, which aren’t observed in any of the solid jets; they also showed lateral striations in the leading part of the jet parallel to the shock front. In addition, Sn3 and Sn4 both showed spike-like ejected material from smaller surface defects in the no-groove regions of the material. Each of these features appear to be directly related to these samples’ melted nature.

Interestingly, the researchers found that the mass of ejected material in Sn was nearly identical for the two conditions that straddled the point of melt on release (~23 GPa), Sn2 and Sn3, with significantly larger jumps between the mass of ejecta between Sn1 and Sn2, and between Sn3 and Sn4. Thus, increasing the shock pressure led to increasing jet mass accumulation rates both above and below this critical pressure, but not in its immediate vicinity. However, this effect seems to apply only to the grooves cut into the material and not to ejecta from the small surface defects in the no-groove regions, which produced larger masses of ejecta with increased pressures.  ― Christen Brownlee

This work was performed under the auspices of the U.S. Department of Energy (DOE) by Lawrence Livermore National Laboratory under Contract No. DE-AC52-07NA27344. The Dynamic Compression Sector is operated by Washington State University under the U.S. DOE/National Nuclear Security Administration award no. DE-NA0003957. This research used resources of the Advanced Photon Source, a U.S. Department of Energy (DOE) Office of Science user facility, operated for the DOE Office of Science by Argonne National Laboratory under Contract No. DE-AC02-06CH11357.