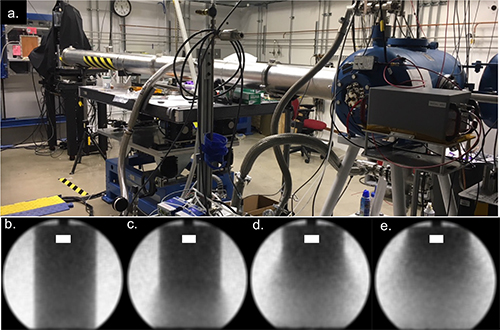 Nanoscale diamonds are used in a broad array of applications, including optical or quantum computing, sensors, and biomedicine. However, these materials, known as nanodiamonds, are difficult to efficiently synthesize and isolate. One way to generate nanodiamonds is through oxygen-deficient detonation of carbon-rich, explosive compounds. This method reliably produces ~4-nm nanodiamonds, but the resulting particles are always aggregated together and intertwined with graphitic and other unwanted phases of carbon. Techniques to separate out individual nanodiamonds, such as sonication with agents that break up and stabilize particles, can change their surfaces and adversely affect their properties. Because little is known about the aggregation kinetics of detonation nanodiamonds, or even their formation or aggregation mechanisms, it’s unclear whether it might be possible to implement interventions that prevent aggregation. To help elucidate the aggregation process, researchers from the U.S. Department of Energy’s (DOE’s) Lawrence Livermore Laboratory (LLNL) and Washington State University used the DOE’s Advanced Photon Source (APS) to track nanodiamond formation and aggregation over time. Their findings – published in the Journal of Physical Chemistry Letters – suggest that because nanodiamond aggregation happens at nearly the same time as nanodiamond formation, aggregation may be difficult to completely prevent.

The researchers studied formation and aggregation using two explosive mixtures known to produce detonation nanodiamonds: a mixture of hexogen (RDX) and trinitrotoluene (TNT) known as comp B, and a mixture of octogen (HMX) and TNT known as octol. They also studied two explosives that produce graphitic carbon allotropes: DNTF (3,4-bis(3-nitrofurazan-4-yl)furoxan) and UFTATB (2,4,6-triamino-1,3,5-trinitrobenzene). Each of these compounds was pressed into a cylinder and detonated inside a tank while time-resolved small-angle X-ray scattering (TR-SAXS) data was collected at the Dynamic Compression Sector (35-ID) at the APS.

Transmission electron microscopy on recovered detonation products showed that each of the four explosives produced a diverse range of carbon nanomaterials. While ribbon-like aggregates dominated the UFTATB products and distinct nano-onion structures dominated the DNTF products, the main products of comp B and octol were detonation nanodiamond aggregates.

Hierarchical scattering seen in the time-resolved small-angle scattering during detonation suggest the nanodiamonds aggregate rapidly: as early as 0.1 ms after the detonation front passes the x-ray measurement position.

Modeling experiments indicated that this phenomenon is consistent with classical diffusion-limited aggregation mechanism in colloids, suggesting that the detonation nanodiamond particles immediately attach to each other when they collide in this high-pressure, high-temperature environment. These aggregates may condense from an extended network of carbon structures, especially in the case of mixed explosives such as comp B and octol in which excess carbon is primarily supplied by only one of the components (TNT for both mixtures).  Thus far, only DNTF products remain as distinct, non-aggregated spherical nanoparticles under the conditions measured to several microseconds post-detonation.

These results suggest that nanodiamond aggregation may be difficult to avoid from current detonation methods, since particle attachment occurs through irreversible chemical bonding rather than electrostatic interactions. Because the nano-onions from DNTF detonation don’t tend to aggregate, it may be possible to draw inspiration from their formation mechanism to develop new ways to synthesize isolated detonation nanodiamonds.  ― Christen Brownlee